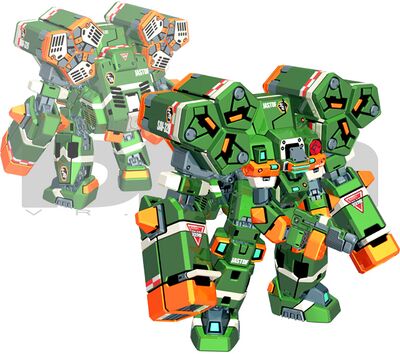 Missiles launched in large quantities from both shoulders have high tracking performance, strenghtening the further you are from your opponent. The reload speed of each weapon is fast, allowing continuous fire.
If you can keep a good distance between you and your opponent, you can create a one-sided battle.

You can fire the cCW and cLTCW missile attack rapidly by rotation cancelling its recovery. Input rotation for a frame, release rotation and attack again.
Does not work if rotation is input too early. Remember to half-cancel the attacks for less gauge consumption.

Do walking LW and immediately input sliding LW (cLW while moving). Both attacks will come out in sequence. The cLW will not consume any gauge.

While LW gauge is around 55-60% fire walking RW and immediately input crouch/sliding LW. The cLW will not consume any gauge. You can for example do this immediately after ‘double napalm’ for a ‘triple napalm’

Many crouching attacks can be transferred into others.

Fire stationary RW and immediately input CW, LTCW or RTCW. The CW missiles will come out much faster along with faster move speed and targetting. Similar to typical instant attack input cancels from RW on other VR.

Firing cLTRW or cLTLW machineguns puts Grys-Vok in a flat low-profile state. It can avoid most high melee attacks.

Grys-vok moves at an abnormally fast speed during the slide-animation on cancelling a ground dash. This is sometimes used to move around, and gives a window to buffer old-style rowing inputs.