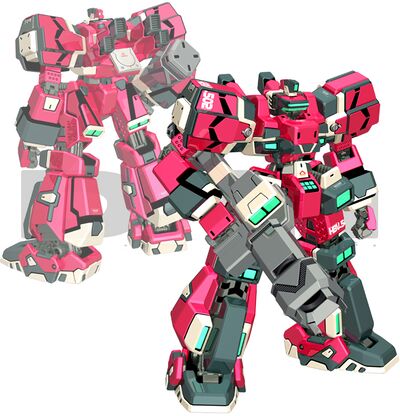 Heavyweight virtuaroid with top class offensive and defensive capabilities. All of the weapons are extremely powerful, especially the lasers fired from the shoulder units, which are extremely destructive.
By anticipating the path of your opponent and firing a laser accordingly you can maintain an advantage over even the fastest machines.

Fire stationary LW then input RTRW. RTRW will come out with the last shots firing earlier than normal. The attack is also dash and walk cancellable much faster than normal.
The same can be done with LW into LTRW.

You can even perform cLW -> cRW -> cLTRW for a combined barrage.

Cancel landing or natural dash recovery with CW or RW startup and dash again to cancel the recovery and keep moving.

Start firing RW in a neutral state and input CW or RTCW as the bazooka is about to fire.
CW laser will come out instantly skipping startup frames. Very tight timing.

Perform a ground dash attack (usually dashing cRW), then input CW at a specific point of the recovery as it’s about to end.
CW lasers will come out instantly in a V-pattern with the other laser shooting off to the side. Very tight timing.