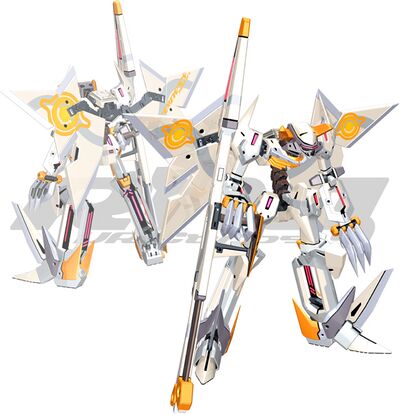 Virtuaroid with the appearance of a grim reaper.
In addition to the ability to disable your opponent's weapons, it has penetrating attacks that will damage your opponent even through obstacles. Maneuverability in close combat is also high.
In contrast to its high attack power the defense of this virtuaroid is extremely low, making evasion the most important technique for victory.

Using cRW and cLW while moving gives specineff a speed boost. Especially effective in diagonal back directions which are usually slower speed. cLW gives a larger boost than cRW.

Dash repeatedly and keep your opponent in sights by rotating during dash and dash end animation. Central movement technique with Specineff

Various Right Turbo attacks can be cancelled into BTCW. You can jump cancel these attacks at any point by using BTCW as an intermediate step. Tight timing is required.

Specineff RW can be cancelled by walking. Do this repeatedly to rapid fire the attack. Unlike temjin the gauge runs out quickly so use sparingly.

GD8:cCW rush attack can be combined with with turbo rotation to move around the stage and take cover behind walls.

While LW gauge is around 30-34%.
Input: on landing cLW -> RTCW
Difficult timing. Can also perform a high speed RTRW instead of CW.

While CW gauge is between 60-75%.
Input: Hold a direction during an RT attack, input BTCW and you will walk/dash out of the attack.
Performs neutral CW if gauge is above 75%.