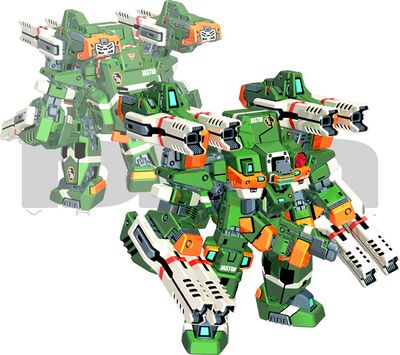 Virtuaroid equipped with a variety of optical weapons throughout its body.
Has a wide variety of attack methods which be freely selected to match the battle situation. The quadruple laser which spreads to the sides is particularly powerful and will easily hit careless movements.

Firing cLTRW or cLTLW machineguns puts Grys-Vok in a flat low-profile state. It can avoid most high melee attacks.

See Advanced Techniques / Rowing for more info
Stein-Vok can row in both a horizontal and backwards direction which is more versatile than normal.

Input: RW or LW into immediate RTCW.
RTCW laser will come out with no startup. Difficult timing.

Instant W-laser after ground dash attack is also available similar to Raiden’s V-laser. Time RTCW at a specific frame of the dash recovery. (This is a universal technique but particularly strong with these large laser attacks)