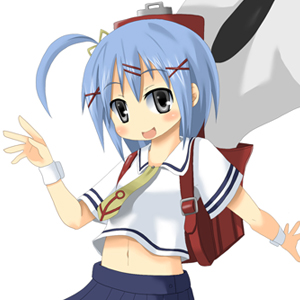 Attends Ouritsuhouken(*) school. Around six years old, she succeeded in communicating with ghosts, became seen as a child prodigy. Since then, however, she's faded into the obscurity of a typical student. Tends to act as a sort of leader among her friends. Is somewhat afraid of large people. It may not look like it, but the spirit behind her is that of a normal human.

(*) TL note: Literally translates to something like "sword of royal law", but I felt it better to leave it as such, since it's a name.

Cielo is the game's archetypal grappler. Her movement is somewhat slow and she lacks an airdash, but she can superjump and doublejump. Her forward and backwards hops can avoid low attacks which make them important tools for approaching your enemy.

Cielo can recover life and increase her super meter by guarding right as a move is about to hit. Guarding in this way also reduces blockstun, negates pushback, and interrupts chains.

You're going to be blocking quite a lot. Learn to time your guard to take advantage of Cielo's just defend bonuses and hit back with a devastating command grab.

Cielo can get most of her damage from okizeme mixups. This usually means either meaty 2K/2S or command grab. Her forward hop is more than enough to close distance for oki after a command grab. Jumps or backdashes on wakeup can be punished with a tiger knee'd command grab.

63214S can be used as a tech punish even at long ranges! In the corner this can start her loop quite nicely.

If you're up on life, consider cancelling your 63214 move with 22 and get a 50/50 mixup out of it. If your opponent is afraid of your command grab, opt for a quick 2A and confirm it into 2HS > 63214HS to start it all over again. It does not take Cielo many hits to win a round!

Stay calm and poke at a distance using 5S, 2S, and 236P to force your opponent's hand.

Use whatever opportunity you can to build meter by walking, hopping, or jumping forward.

Although it's tempting to jump in with J.S all the time, J.HS has better potential to beat other moves and anti-airs.

Use your double jump to position yourself on top of an opponent during okizeme for an ambiguous j.S crossup.

Be sure to mix up blocked normals with either nothing or cancelling into 63214S. If done properly any blocked normal can be potentially safe.

After a successful command grab, forward hop twice to get back in throw range. If done near the corner, the second hop will cross up and prevent wakeup backdashes. Even better in this situation, delaying your hops so that it will not cross up!

Meterless, Close 5HS > 6HS > 4123694P
•It is important to learn the timing for the command grab, which is not immediate.

Meterless, Midscreen from Corner xx > 63214 > 5P > 5S > 63214HS
•This is an infinite if the opponent chooses not to tech after the second 63214 wallslam. Most recoveries can be caught using 63214HS again. A quick recovery will require you to hop forward for a command grab.

Congratulations you threw the round.

You must respect Ryuza's projectile oki at all times, as your only real option against them is blocking. On wakeup in addition to jumping and backdashing he can also avoid a grab using his DP. DP beats tiger knee'd air throw as well but will miss Cielo's 2K entirely, giving you plenty of time to punish. You can also fish for counterhits in the air using J.HS as it will stuff his DPs at certain ranges.

Aiwhen will mix you up nonstop and there is very little you can do about it. Keep blocking and suck up the damage until the Aiwhen player decides to use something unsafe. Aiwhen has the lowest HP in the game, and as such Cielo only needs to combo her twice to win. While annoying, Aiwhen's full BnBs do not harm Cielo all that much. In neutral, make good use of 2HS to catch random teleport dashes, as it won't matter if Aiwhen decides to cross up or not. Cielo's 421K counter is nearly useless in this matchup.

If you get caught in her doll loop, you absolutely must not just-defend any of the hits other than from her doll, as the pushback is the only reason the loop ends at all.

Her unblockable anti-airs make jumping in dangerous. Even if you double jump to avoid getting hit, you will not be able to punish her for whiffed anti-airs. Stay on the ground and aim for full screen punishes with 236P and 236236HS. If she starts to rush you down wait until she tries something unsafe and poke her out of it. Neva deals enough damage that trades are generally not in your favor.

Always be wary of Lynia when she has meter, as you cannot throw her out of her super and she can make any of her specials safer than they look. If Lynia attempts to use Blue Shooter as okizeme, you can super jump on wakeup to dodge it even if it looks like it's hitting you. This won't work at point blank range, but at that point you should just throw her. If Lynia attempts to zone you out using Rain of Lamentation, stay calm and walk back and forth to build meter for I'm Angry! to punish.