Claudette's Original Action, Sonic Impact, spends 25% meter to increase the hitstun and blockstun of moves if the O button is pressed with precise timing when the move hits. Using 22O will spend 50% meter to give her 3 free charges of Sonic Impact for the rest of the round. Using either of these moves will put her meter gain on cooldown similar to using a BRK.

Claudette can also cancel certain normals with a backdash on hit or block.

Claudette is a highly mobile rushdown character, with a good dash, quick movement in general and fast normals. She has great corner carry and combo potential off of stray hits in neutral and does a fair amount of damage, especially once her Original Action is factored into her combos.

However, Claudette's main weakpoints are her relatively short range on her normals and her abysmal meter gain. She will rarely exceed 100% meter in a given match unless you go out of her way to optimize combos for meter gain as much as possible, meaning that she does not get as many opportunities to utilize BRK for mindgames.

Playing Claudette well requires getting in and sticking to the opponent at close-mid range, as well as carefully judging when to use meter and when to conserve it.

Claudette's primary goal is to get in close-mid range and stay there so that she can bully the opponent with strong pressure and movement; it can be very hard to shake her off once she's found her spot, and in her favored range she has a lot of conversions or corner carry potential.

On the ground, Claudette's farthest reaching normals are 5S and 5HS. When she's far out, far 5S can be special canceled despite its lack of gatlings, and 5His a little slow but has a lot of gatling routes leading into it. With 25% meter for Sonic Impact, it becomes a powerful tool to set up combos.

5K has some utility for stopping jumpouts when used in strings, and is jump cancelable, so it can be used for conversions also.

For command moves, Claudette's 3S has a decent amount of reach, though it has a slightly slow startup. Her 4S is a decent anti-air tool for characters that are approaching from a high vertical angle, and if it catches them just low enough she can jump cancel and convert into a knockdown or a wallbounce for a mid-screen air tech.

In the air, j.K and j.S are both okay as air-to-air options, though j.S is slightly more reliable if the opponent is a little far away. If trying to hit air-to-air against an opponent higher than you, definitely use j.HS. It has an absurd amount of hitstun and is also jump cancellable.

Because of her ability to backdash cancel certain normals and command moves even on block, Claudette has quite a few options for baiting Moment Attacks or putting some amount of space between her and her opponent if a move is blocked.

In terms of special moves, Claudette's 214S and j.214S give her strong control of horizontal and diagonal space respectively. With proper spacing of these moves, Claudette can safely cover a large distance with relatively active hitboxes, and if she has meter for Sonic Impact, she's got amazing conversion potential. 236HS can be used to hop over some moves and hits overhead with a fairly fat hitbox, so despite its slow speed it has deceptive reach and can be used to punish certain retreats or moves.

A vital key to Claudette's pressure and conversion game is knowing her gatlings. A chart explaining them is shown below. 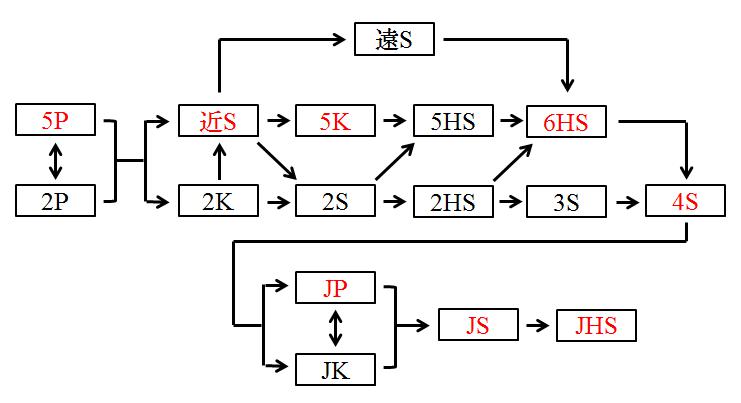 Most of these normals are special cancelable also.

One of Claudette's deadliest pressure tools is her 2P--its 4f startup makes it incredibly fast for this game and it cancels into itself, and it gatlings well into most of her other standing and crouching buttons in addition to being special cancelable; setups like 2P 2K 6H are great for keeping the opponent on their toes.

Claudette can get jump cancels off of the following moves:

5K jump cancels are especially useful if you manage to catch an opponent trying to upback during a string or more rarely tag them with it as an AA. 4S has a similar use for opponents that approach you at the high angle, and it's usually a good idea to jump cancel 4S and go for j.HS 214K or j.HS j.214HS.

Claudette has a couple of different okizeme options to choose from, depending on what gets her the knockdown. In a general sense, airdashing and using a falling j.K or j.214HS~K into falling j.K are the most common options if you think that the opponent isn't going to use an AA reversal, though a TK j.214S is also an option.

In a lot of knockdown situations, Claudette can use 2K 236P to pick the opponent up for corner carry, though this will allow them a tech close to the ground. An alternative that sacrifices carry distance is to use 2K 214S, which keeps the opponent relatively low to the ground and generally doesn't allow for a tech.

Anywhere that you see the word "ender", you can choose to do 2K/2S/2HS 236P/214S for an OTG corner carry. 2K is the most stable option since it comes out quickly but if you think you need the reach use 2S or 2H instead.

236P will give you more corner carry but will allow the opponent to tech slightly higher in the air, which you may be able to punish with an air grab. 214S will keep you in closer but will force a much lower ground tech, if at all.

Use the 236P ender for corner carry; you'll have to dash in afterward to maintain close range, and if you really want the full corner carry you can do 2K 236P after a dash-in. The opponent wlll be able to tech low after the second 236P.

A variant of the above combo that trades corner carry for positioning and oki.

A third variant of the above routes, balancing corner carry and positioning.

j.214H switches sides, and will wallslam, allowing you to dash in or go for an airdash to try an airthrow.

An alternative to the above combo. Gives a knockdown.

A combo off of universal overhead. Otherwise similar to the second 4S combo.

Short combo that forces a knockdown.

Alternative to the above. Slightly more meter generation due to using 236P, but like the above combo, you can add extra damage & meter gain with 66 2K 236P if you don't mind giving the opponent a low tech.

623S will leave airborne, 236P will tech close to ground.

If you use 22O ahead of time this can be done for 50% meter instead.