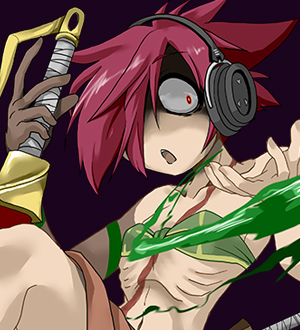 Magenda's Original Action consists in a series of additional normals which, on hit, apply poison to the opponent. All her specials, both her supers and throws also apply poison.

Poison eats away at your opponent's health at short intervals and the more poison you apply the shorter the interval will be. Some moves inflict more poison than others. Poison is only removed at the end of the round, but it will stop hurting the opponent once they're down to 5% health.

In addition, Magenda can dash-cancel (both forward and backward, even in the air) her S and HS normals as well as her specials.

With an additional set of grounded and air normals as her Original Action, 8 command-normals (excluding the universal 6HS) and long range, Magenda has one of the most rich, versatile and effective sets of normals.

Poison will happen rather naturally during the fight, yet will result in high damage if the round gets dragged for long. Opponents who'd rather fight at a distance will have to play riskier, as Magenda has no reason to force herself to get in, as poison will drain their health away.

With the ability to dash-cancel her normals and specials, attacks that move her forward, attacks that make her airborne, a number of overheads and multiple tools for cross-ups, Magenda has some of the best pressure and mix-up in the game.

On the other hand, her normals don't cancel into each other quite as freely as other characters, plus cancel windows are extremely short, so frame traps are not an option. Magenda's pressure is still impressive, but requires knowing her cancel routes and getting used to her unconventional style.

Magenda's normals also tend to be slow on start-up. While some of them are fast, the limited cancel routes may limit their usefulness.

However, Magenda's greatest weakness comes from how delayed her dash is. Being able to dash-cancel practically anything means it has to be balanced by a considerable delay. This can be frustrating when you need to dash for movement, as it so slow and alternative ways to move, such as 214S or j.236S, come from predictable angles.