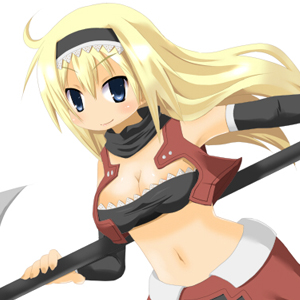 Vice-leader of a group of knights on good terms with Ryuza's group. Although she's the daughter of a noble family, she is quite a lively, powerful fighter. Likes working outside, and is often going on travel for her work. Acts cool while among her group, but tends to do whatever she feels like when out and about.

Neva's axe attacks cover a wide, sweeping range. Her ground moves can't be air guarded so she can force people to stay on the ground. High overall damage, thrown off by relatively slow speed on moves. She can convert her Counter Gauge offensively as an attack that converts it into Skill Gauge. Recommended to those who like to win by brute force.

Ground Approach
Neva has a great forward ground dash that has some invincibility on it (goes through many projectiles!), and moves her forward fast enough she can capitalize on a small opening pretty well. She also has a lot of range on her ground pokes in general, most notably 2K (quick, low hitting), f.5S (great range), 2S (crouching profile, big hitbox), and 5HS (huge hitbox, but slow). This being said it's no suprise that she's very comfortable sitting at a range where her axe pokes are a threat, but she can also dash in and attack with a fast 2P or maybe 5P easily. Neva also has some other strong ground tools to help her get in, the most obvious one is her Hyper Comet (236P).

Hyper Comet has some very long startup, but once it goes active it's fully invulnerable until recovery, and can be safe on block when it hits late in the active frames. This move is most commonly seen used against other characters' projectiles to go through and punish them. However that's not all it's good for, if you are at a good distance you can use it against a grounded opponent and it will be safe (anywhere from -20 to +4f on block depending on spacing), however it's rather hard to get frame advantage off of it because the other player can move around the whole time you are moving, so use your best judgement. The other thing this move is good for is a sort of bootleg anti air, full invulnerability and huge horizontal distance covered means it can catch people unawares in the air. It will generally only hit airborne opponents once, knocking them down for minor damage.

Other Grounded Options
Ascension Trap (623HS) can be used as an anti air, as a counter to projectiles, and sometimes even other melee attacks. The downside to this move is that the startup is sluggish, and recovery is rather slow as well, though that can be easily fixed with a BRK.

Gaia Strike (236S) also hits up high in a fashion similar to Ascension Trap, however the startup is much slower, as well as the recovery. Gaia Strike covers a different area, about as high as Ascension trap except for more forwards. It's effective against grounded opponents, and you can catch people in the air unawares. However you have to be very careful against someone who is experienced in the matchup, because baiting it with a double jump could be the end of you.

Aerial Options
j.HS overall, is probably Neva's best normal in the air. It covers most of the area in front of her, extending to even above and below some. It ground slams on counterhit, and knocks down on regular hit, so you will always gain momentum if it connects. The weakness is that startup is relatively slow, you can't just be airdashing in recklessly with this move. When fishing for j.HS your safer options are to jump and double jump a lot, as well as air backdash.

Even if j.HS is her most used move, pretty much every air move has a use. j.S is great if you can get above your opponent and try to go for a crossup (the crossup hitbox is much stronger than the non-crossup hitbox). j.P has a strong disjoint downwards hitbox making it your ideal move for a regular jump in (i.e. no airdash, or high airdash), the followup with a j.K on the way down. Be careful with j.P jump-ins because it can be punishable if backdashed. j.K should be used from IADs and for in-your-face air-to-air situations.

At a basic level, it's extremely easy to pressure with Neva because her basic blockstrings perpetuate themselves. A good player can use fatal switches for garunteed escapes, anti air out of bad jumps, and of course reversal our Moment Attack out. Neva has no real high-low mixup that gives real damage, the other player can opt to always block low even when the threat of instant overhead j.P is there, or wait until Neva is pushed out of range to stop blocking low, as both of her overheads she can combo off of are completely reactable. What makes Neva's pressure scary, is that nothing she does can really be chicken blocked (if they chicken block some air attacks it's easy to come down and punish), so she can go for a more traditional tick throw mixup. Once she lands a combo she has some further mixup options available to her. All of these things combined make her extended pressure quite a threat to deal with.

Make your opponent respect Neva's basic options, then start going for more tricks like 2P > Dash Throw (yeah not much of a trick huh), empty jump-in > Throw, or 6HS overheads earlier in chains where it's not expected. Once you have meter as a threat if you are daring enough you can even start trying to use Raging Pressure to open people up (such as off jumpin j.P K), it can be just as effective in pressuring as it is in oki when used right.

If her 6HS is blocked, you can use Swing Down to snuff any sort of retaliation, or dash cancel it and continue pressure / punish backdash attempts.

You can add any standing normal other than 5H or 6H straight into super to add extra damage, here's some examples:

You can use war cry to create meterless, meter building combos. Or even better, you can use it to get a super combo for the kill early on. Here's some examples:

Can optionally add OTGs after any hard knockdown

None of Neva's ground moves can be air blocked, with the exception of War Cry.

From the JP Wonderful World wiki.

Level 0 is doing nothing in the air, level one is a Punch attack, and so on. The recovery can be attack canceled.