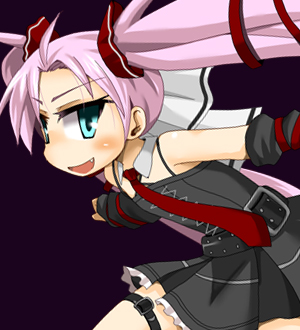 Each of Pale's specials will apply a different sweet mark on the opponent when hitting them. Using her Original Action, Sweet Jewel, will trigger all marks, causing a fast, full screen attack that will deal more damage with more marks.

By pressing 22O instead, Pale activates the marks and also consumes 50% meter to enter Honey Sweet Jewel mode, during which marks applied by specials are automatically triggered upon hitting the opponent. This makes certain damaging combos possible, but you no longer have access to manual activation of sweet marks, which is a quite threatening attack.
Honey Sweet Jewel mode does not carry between rounds.

If you input 22O during Honey Sweet Jewel mode, it will be disabled, but it will cost you another 50% meter.

Pale has some great anti-air tools, especially her 623HS, and her fast movement allows her to move around quickly and nimbly slip away from the opponent when given the chance to. While she really struggles up close, her original action can be used to stop the opponent's pressure, or making it scary for them to blindly dash in.

Unfortunately, due to her peculiar fighting style that makes her so powerless up close, Pale has many hard match-ups, with some of them being nearly impossible to win.

To make it brief, Pale never wants the opponent to be close. Ideally, you want to keep them at a distance where both 2HS and 6HS can connect, as the latter in particular leads to very damaging combos that end with hard knockdown.

623HS is air-unblockable and poses a big threat against jumps, so you can make the opponent afraid of moving in the air with it. On the ground, you can make them scared of walking closer with 2HS and j.HS. 5HS is your best tool when you're not sure whether the opponent is going to jump or stay on the ground.
From full-screen away, you have 2P~P, which is a very fast, low poke.

If the opponent gets too close, you can jump and air-dash above them and hit them with j.2S into j.236S for an unexpected overhead cross-up, or, if you prefer to stay on the ground, poke them with 2K and follow it with 214S to push them away.

If you've been pushed into the corner, you can jump and press 9 for a wall-jump forward and follow it with j.2HS, which hits high.

Weak overhead-starter combo that can be used almost anywhere, as sometimes being close to a corner may prevent the last hit of 214HS to connect. Overall this combo is to be used when you're not sure the next one will work, as it is more lenient on the opponent's distance, and position relative to corners.

Overhead-starter combo that deals good damage. The opponent needs to be a bit on the close side of 6HS, or one of the 214S may end up whiffing. If you or the opponent are in the corner, it may mess up the combo. Other than its specific requirements, it's an excellent combo as it sets 3 sweet marks on the opponent and can be followed with 236K for oki, or O to activate the marks if the opponent just barely survives the combo.

214S-starter combo. Doesn't deal a lot of damage, but it's a good combo to punish mistakes your opponent does up close. 2K chains into this on counter-hit.

Overhead-starter combo that requires Honey Sweet Jewel mode. It may look silly, but it does a lot of damage. Pale can actually do a visually similar combo without 22O active, but it doesn't do nearly as much damage due to the lack of the extra hit that Honey Sweet Jewel provides. The fifth 214S, within brackets, must be omitted for the combo to work against Cielo (566 damage).