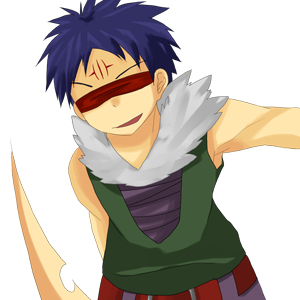 A high-ranking demon living in hell. His hobbies include going above ground to smash up villages every once in a while. Several years ago, a certain swordsman cut out both of his eyes. However, even without his eyes, he can somehow see. He is the one who taught Lunathia dirty words.

Sabe is a bit of an oddball character. He has amazing anti air options and a fullscreen grounded projectile, as well as a comboable command grab and the best jumpin in the game. He is somewhat lacking in the mixup department, but he makes up for it by netting incredible damage whenever he lands a combo, beyond 50% on most characters for as little as 2 bars.

Sabe has no Original Action.

5P: An average standing jab. This isn't + frames or neutral so don't use it to tick his command grab

2P: An average crouching jab. It's not + frames either

5K: Somewhat slow arcing kick. It looks like it's overhead, but it's not. Wallslams/hard knockdown if the opponent is currently being juggled and hit by this move

j.K: Twirling air kick that can crossup. Knocks down on normal hit, groundslam on counter. Good for air to air.

j.S: JC Rising punch in the air, juggles on hit. Chains into j.K and j.HS.

6HS: "Dust" overhead slash. Can juggle afterwards. Pretty slow. Has some invincibility, but it might just be above the waist.

214HS: Dance of Swords - Spawns swords in a large area around himself that spin around for a brief moment. Controls a lot of space, including in the air, but can be punished on block by some moves. Knocks down if it hits a grounded enemy

236S: Road of the Dead - Slam the ground to create a wave of swords that travel fullscreen. Slow startup, but the swords move quite fast and do a lot of damage if they hit

236HS: Tomb of the Saint - Lift the opponent and throw them into the floor, generating a shockwave of swords. Pseudo Grab. It looks like a throw, but it's actually blockable. However, it will beat out pretty much every move that isn't invincible in a grounded battle and combos easily with massive range

j.236HS: Tomb of the Saint - Slam dunk airthrow! Again, a Pseudo grab, since it's blockable, but serves as a great combo tool

214P: Casket of Repose - Throw the opponent into the air, pierce them with swords and let them fall again. Command grab, VERY small range. Can combo off afterwards meterless, but the prorating is somewhat heavy

623P: Edge of Anguish - "Pull my finger". Points in a roughly 45 degree angle above him and shoots a massive multihitting sword out in that direction. Wallslams. No invincibility, but it is air unblockable, so it's a pretty decent space controller against people trying to chickenblock their way out of pressure

2146HS: Sword Hades - Slash the opponent a few times before stabbing them into the ground. Does massive unprorated damage. Has a range of about 3/4 of the screen, and a good deal of invincibility

j.23623HS: Tragic End Slam dunk the opponent, then throw them into the wall and impale them on swords. Pseudo grab. It is affected by proration and is generally not worth the meter

Sabe is very much a "go with the flow" character. You have a good amount of options no matter what's going on, so you mostly have to just play basic response game. If the opponent is dicking around and running away from you, use 236S/j.HS and dash 623P/2HS to catch them. If they keep trying to pressure string you, 236HS can grab them out of nearly anything. If they keep jumping at you/iading, use 2HS/623P and combo accordingly. If they're actually blocking go for 2B ticks into command grab or overhead. As long as you capitalize properly on all the damage opportunities you gets it's not hard to keep up or turn a match around entirely.

Get in. That part isn't really Sabe specific, but it applies to him more than some characters. Sabe's zoning isn't exactly what you would call stellar, which is why Lunathia will just walk all over you if you stay anywhere out of normal range. Once you do get in, though, the matchup becomes a lot easier. Lunathia's close game is alright, but yours is probably better. If you can land a hit on her, you're looking at anywhere from 40-80%, depending on the meter. Watch out for Hell's Rain. Basically, the matchup comes down to DO NOT LET HER KEEP YOU OUT. All she needs is to make one mistake and the round is yours.