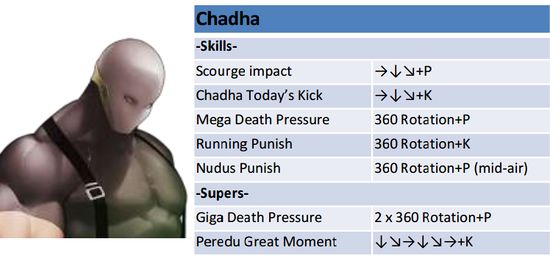 Chadha is a soft spoken wrestler. As the archetypal grappler his fighting style favors high-risk high-reward throw mixups. Chadha is normally slow and hulking but can move at surprising speed in bursts. Unlike most other characters, it is essential to learn how to defend yourself properly to avoid being whittled away by nimbler characters who will try to pressure you forever. Chadha's greatest assets are brought to full bear after successful parries.

Chadha has a scary mixup game and good single hit damage on his normals. The goal of any grappler character is to instill fear of the command grab and psyche them out.

His cr.HP into LP Scourge Impact combo puts him in just the right position to go for mind games. You could do either 360LP Mega Death Pressure, 360K Running Punish, another Scourge Impact or EX Impact, if the Scourge Impact whiffs and you're close enough or they block it you can go right into Gige Death Pressure, walk in and throw or tick into the regular throw with LP or LK, or walk in cr.HP into Today's Kick. You could also do HP or HK. HP will catch them if they try to neutral jump or jump towards you or just generally tapping buttons. HK will catch them if they try to jump away. Or even jump and Nudus Punish. You have a ton of options with Chadha. Experiment and see what they're weak to.

Once you get a knockdown you could do j.HP or j.HK but getting a good setup is hard because his command grabs send them flying so far away from you. If you can get the setup than go for it, be aware that certain AA normals (like Shoto cr.HP) beats j.HP.

Aside from basic tick setups or doing cr.HP on their wakeup you could also just do EX Scourge Impact. It will beat any wakeup attacks except for Supers. The problem is the amount of damage you do to them will be roughly the same as they do to you. They could also jump out. Something worth exploring to keep them in check.

If you're close enough it's often a better idea to go for a regular throw rather than a Command Grab just because your command grabs have significantly more recovery. Let's say you tried to grab them on wakeup and they jump out. If you did a regular grab they can still jump and HK/HP you but they cannot get a full combo. If you did a Command Grab then they have more than enough time to do that. You could also do cr.LK and LP or EX Scourge Impact to catch them trying to jump out or trying to tech a throw.

If the opponent wants to play keepaway/zoning be aware that you're cr.HP is a very good normal and is excellent at whiffing and building meter. You could also harass them with LK Today's Kick at the right range until they punish it. Building meter and getting a Super loaded and dare them to jump at you is legit. You could also use your other good normals like st.HP and st.HK to footsie them. Be aware that j.HK has deceptively good range and at almost max range can still be comboed into cr.HP and then Today's Kick.

Unfortunately while Chadha can cancel HP into his Grab Super, if the opponent parries the HP they can still hit you out of the Grab Super.

More reset gimmicks: If you do an EX Scourge Impact and you don't combo into Peredu Great Moment or you're too far away you could go for a reset by comboing right into either LP or cr.LP.

Following the cr.LP you could walk in and do; cr.HP, HP, HK, cr.LK. Be super risky and a do a Drop Kick. You could also dash in and Giga Death Pressure or LK Super as they land. If they try to jump out cr.HP and cr.LK will catch them.