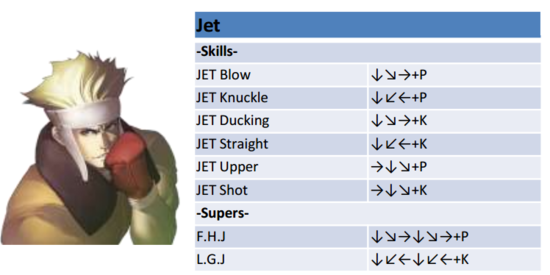 Jet is a close-range powerhouse who excels at pressure with most of his normal moves being very advantageous on block, as well as being able to reset the opponent into a low/high/throw mixup anywhere on the screen. Using his L.G.J. super he can easily carry to the corner. His main weakness lies in the footsie game as he has trouble confirming into damage from longer ranges, and the range on most of his moves is pretty short.

All of Jet's hard versions of his special moves cancel into any of his other special moves, except into 236K. Can only cancel into moves that have not yet been used in the current string, and only up to two times.