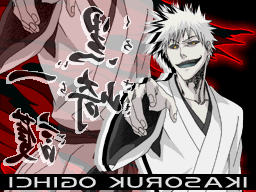 Zangetsu, Ogichi or Hollow Ichigo is the manifested spirit of Ichigo Kurosaki's Zanpakutō (His Sword) as well as his inner Hollow. He is a powerful spirit that was born when Ichigo Kurosaki underwent training with Kisuke Urahara to regain his shinigami powers. His relationship with Ichigo represents the idiom "two sides of the same coin," or (more appropriately) the philosophical concept of yin and yang. Unlike other hollows, who are the central villains of Bleach, Hollow Ichigo plays the role of the anti-hero who eventually becomes Ichigo's greatest obstacle and ally as the plot progresses.

In Bleach Dark Souls, Hollow Ichigo is a rushdown-based character despite having such good defensive tools aswell as offensive. He sports high damage far reaching normals and specials that lead to very safe interactions and he can offer some good pressure and baits from afar. His combos mostly consist of easy magic series TAFS loops into repetitions of his SuA and most of his normals (combined with his speed.) allow for easy conversions into his BnB. His defense (health) is under-average but he is still EXTREMELY well-rounded, and is a great high-teir pick for beginners.

- Okizeme is really half-baked along with the fact it requires RF meter and good stage positioning to be anywhere reliable. - Very Punishable Level 1s.

(His Normals are very similar to that of Ichigo's. However, some of them have very slightly altered framedata/hitboxes, and different animations, mostly consisting of hollow ichigo using one arm to swing the sword rather than the two Ichigo would.)