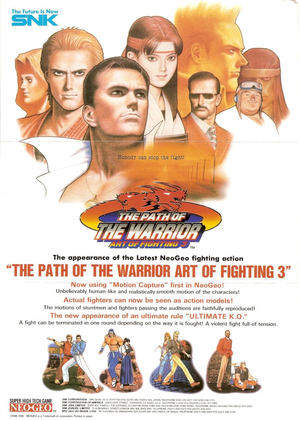 Art of Fighting 3: The Path of the Warrior (龍虎の拳 外伝, Ryuuko no Ken Gaiden) is the third entry in the Art of Fighting series, developed by SNK and released in 1996 for the Neo Geo arcade system. Unlike the previous two games, Art of Fighting 3 would take a much more unique approach to its gameplay and graphics to stand out more from SNK's other titles, featuring rotoscoped graphics and inspirations from 3D fighting games of the time to its core gameplay.

After the King of Fighters tournament, Robert Garcia decides to go on a date with his bro Ryo Sakazaki's sister, Yuri. Then suddenly, a man ends up on the road in front of Robert's car, dropping a woman's bag. Robert recovers the bag for the woman when she approaches it, and a reunion between Robert and Freia Lawrence occurs, whom they have not seen each other since childhood. Unfortunately, her father died. Their fathers did research together, until Robert's father decided it was too dangerous to continue, and abandoned the lab with research data. Said data in hand, Freia goes off to the mansion of a man named Wyler, and Robert chases after her. Wyler is after Freia, however, so that he can complete an elixer for big bad things, because he is a big bad baddie with a compulsive addiction for flexing. Naturally, he must be stopped at all costs or else he will unleash the 5A of Doom upon the world - a normal so powerful it's rumored that it can defeat even Omega Rugal. Now that's scary.

What kind of game is Art of Fighting 3?

Art of Fighting 3 is most often described as being like a "2D Tekken" of fighting games. This means a focus on movement, whiff punishments, poking, okizeme, frame data, launchers and juggles. It’s also a game of managing your special moves with care, otherwise you’ll deplete your meter too quickly, encouraging players to balance offense and defense. This is meant to encourage players to carefully select when they use their special moves, making for a risk vs reward type of management to the meter system.

Play this game if you want...