Samurai Shodown (known as Samurai Spirits in Japan) or "SamSho" is a 2019 fighting game by SNK, colloquially referred to as Samurai Shodown 7/SS7, due to being the 7th mainline entry in the series. Canonically, the game takes place between the events of Samurai Shodown V and the original SamSho. However, it has also been called a soft reboot of the series, due to featuring characters from various points across the main timeline. The game is considered a cult classic in the fighting game community, due to its unique gameplay style.

The Samurai Shodown series, and by extension SamSho 2019/SS7, is unlike any fighting game in today's market. Its most notable features are its easy to pick up game mechanics and short (on average) combos, which still offer immense depth of gameplay, due to its slow pace and high overall damage, along with the mechanics being impactful enough to add many layers of decision making and mind games.

The game features strong offensive mechanics like untechable throws that can be combo'd out of, an universal, high damage move in the form of Super Special Moves (SSM) and Weapon Flip Techniques (WFT) - supers that do high damage and, on hit, disarm your opponent, robbing them of the majority of their moveset (usually) and forcing them to fight an uphill battle to retrieve their weapon.

SamSho's defensive mechanics aren't anything to scoff at either: the game features various mechanics that can turn the tide of any match in your favor, as long as you capitalize on them correctly. SamSho's most famous defensive mechanics are its Deflect and Blade Catch, which can deflect any weapon-based attack, putting your opponent in an unfavorable position and a burst system, known as Rage Explosion - an unblockable, 0 damage attack with high pushback that can be done even while in hitstun. Rage Explosion gives you instant access to your Weapon Flip Technique and a powerful comeback mechanic known as Lightning Blade or more commonly known as Issen, a lightning-fast, full-screen dash attack that scales off of your missing health and can do up to 70% of an opponent's lifebar in a single strike, ensuring that no match is one-sided, regardless of the current gamestate. It also features a Just Defend, where if you block just before an attack connects, you recieve no chip damage and get access to Stance Break, a 0 damage guard cancel that knocks the opponent away, giving you some breathing room.

Due to the strength of both offense and defense, SamSho forces both players to make every decision count and to observe their opponent's habits carefully, giving its neutral a unique feel that no other fighting game can really replicate.

The game features a varied roster of 30 characters from across all of the SamSho games, along with some amazing and ...rather questionable guest character choices, adding a variety of choices in terms of playstyles commonly seen in other fighting games, although they have been tuned to fit SamSho's gamepace, giving a unique take on staple archetypes and unique character styles that you can only find in a game like SamSho.

The game is also set to receive a netcode overhaul, replacing its rather horrible delay-based netcode system with "Rollback Netcode" created by CodeMystics, a company which has already retrofitted various, older SNK titles with their brand of netcode with overwhelmingly positive reception!

(The Rollback Beta Testing will start on February 10th - February 17th (JST) on Steam)'
Please play as much as you can and help test out the Rollback Netcode and give feedback on the forums while it's up so we can get the best product possible! <3 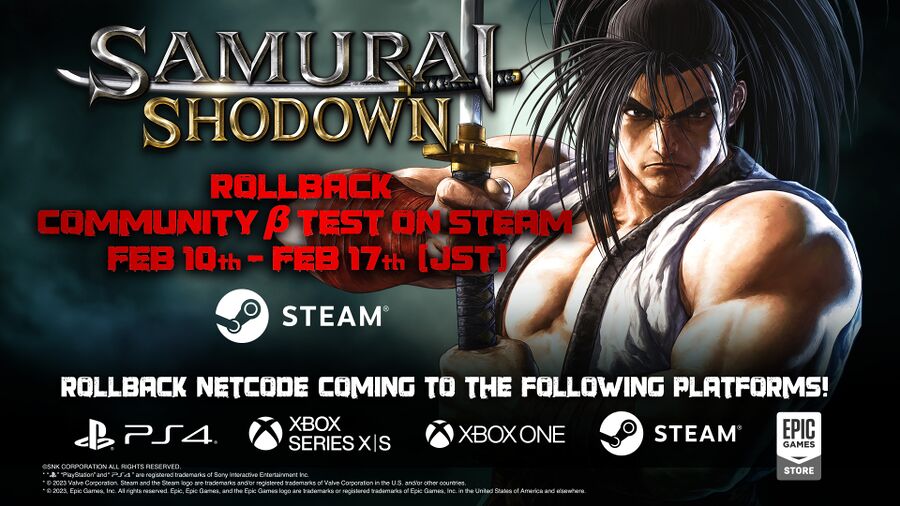