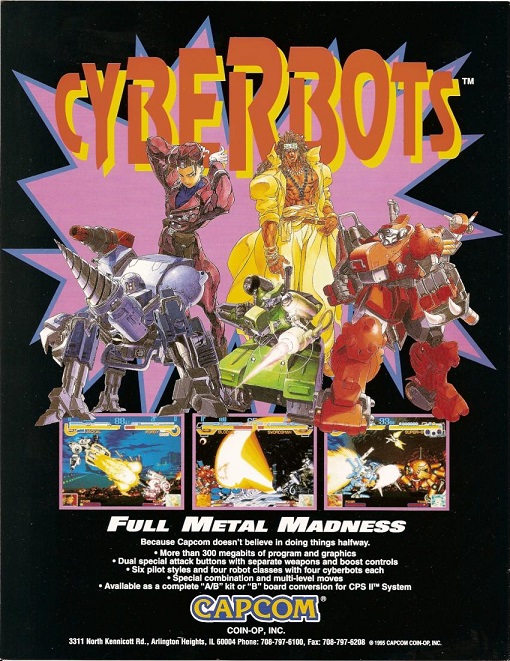 Cyberbots is a 2D fighting game made by Capcom in 1995 and is based on designs first seen in the beat-em-up Armored Warriors/Powered Gear.

Cyberbots is both a fast and slow paced game with very high mobility that allows players to both attack relentlessly, and run away effectively. The Variant Armors (VA) that players take control of have very unique mecha designs, and offer a high degree of variety in play style. Despite many VAs sharing similar moves due to the standardized equipment that is merely shuffled around, the subtle differences in each of these result in much different game play styles when looking at the overall context of a character. While the game is relatively unexplored, the tiers overall feel tight and a player with a sufficient grasp of the mechanics will find themselves well served with any VA. One possible reason for this unpopularity might be that this game feels very different to play when compared with more traditional fighting games with a heavy focus on air movement and long aerial battles leaving uninformed players who give it a shot finding it unfamiliar and strange to play if they try to play in a more traditional manner. This unique game play is also a positive feature, as it creates a much more convincing example of mecha combat than any other 2D fighting game. If you have an interest in playing a fighting game that really delivers a mecha feel through both visuals and mechanics, then you should try this game.