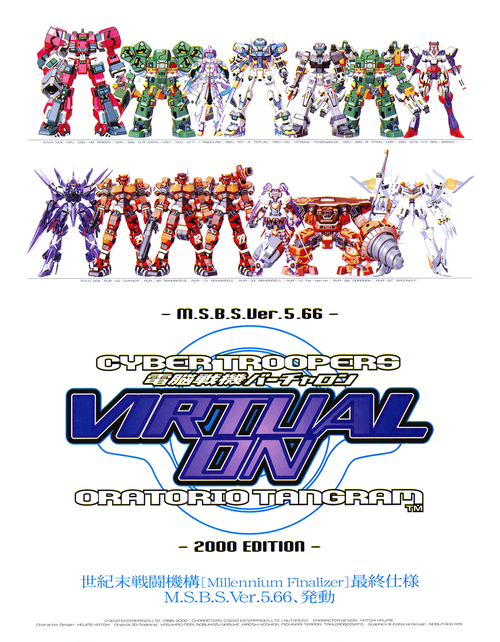 Sega's 1on1 3D arena fighter Cyber Troopers Virtual-On Oratorio Tangram (電脳戦機バーチャロン オラトリオ・タングラム). A sequel to the first Virtual-On game from 1995.
This wiki is for version 5.66 of the game which has been ported to various consoles.


This is a fast paced and unique fighter with highly free movement in a 3D arena and projectile-focused combat with mecha characters. The Virtual-On series is known for being played with a unique controller: Twin Sticks. You control mecha with a very unique control scheme similar to tank controls. However, the series is just as playable on gamepad and controls translate over well to a more traditional layout.

As a sequel Oratorio Tangram added an explosive mix of new mechanics, attacks and gameplay speed. It’s a 3D airdasher with tons of movement techniques and 15 characters each with over 100 total attacks. There are still beginner friendly tactics and characters. Once you understand the basic concepts of dodging attacks and moving around it’s easy to make progress just playing matches.

Movement vectors involved with ‘dash attacks’ are a central concept, with angling and timing various attacks correctly to hit the opponents opening being a focus. Players also make aimed attacks to block the opponents path and quick movements anticipating and countering their next action. Predicting the opponents actions and making hard reads is a thing like in normal fighting games.