Neo Turf Masters, also known as Big Tournament Golf in Japan and in some subsequent ports and re-releases, is a golf simulation game developed by Nazca and released by SNK for arcades (running Neo Geo MVS hardware) in early 1996, the Neo Geo AES on March 1, 1996, and the Neo Geo CD on May 1, 1996.

Neo Turf Masters is known for its simplistic gameplay, difficult courses, stylish visuals and music, and a unique continue system (where exceptional performance rewards the player with additional game time). It is the spiritual successor to the team's earlier Irem golf games: Major Title and The Irem Skins Game.

Every subsequent release and port of Neo Turf Masters made since 1996 has been based on the original AES/MVS version of the game. The NeoGeo CD version of Neo Turf, however, remains an unusual and fascinating oddity of the game. Filled with extra features, game modes, an arranged soundtrack, and an extra course in Scotland, the CD version is much more of a feature complete video game than the AES/MVS version. This however comes at the price of running on a NeoGeo CD, which has extremely long load times for nearly everything in the game.

Features available in the NeoGeo CD version not present on the original version:

If you ask 10 different people this question, you're gonna get 10 different answers, but this is probably the most "agreed upon" tier list for Match Play: 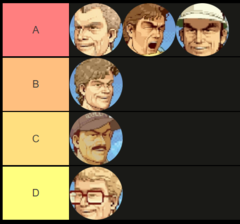 All characters are perfectly viable though and overall the tiers in this game are quite flat.

There are many rules people have used over the years for this game, but these are the most standard ones:

Generally run as single elimination, first to 1, as the game will just take far too long otherwise. Infinite continues/free-play. Course is random (on the course select screen hold down C then press A to random select).

Used for offline multi-day events. Participants do a stroke play course on 3 courses, one on each day of an event, usually Germany Friday, Japan Saturday, Australia Sunday. Infinite continues, they play the full course. Participants get only ONE run on each course, no resets! Scores at the end of the weekend are counted as the sum of all 3 days.