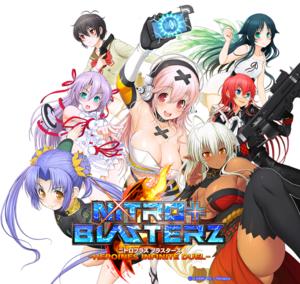 Originally announced in 2009 as one of the many projects in Nitroplus 10th anniversary lineup, the game remained in development hell until December 2014. Rather than keeping the game an in-house project, Nitroplus have outsourced it to EXAMU, a well-known fighting game developer. As a result, the game does not have much in common with its poorly made predecessor, having received an upgrade in both graphics and combat system.

Nitroplus Blasterz has a cast of 14 playable characters and 20 partner characters, featuring heroines from numerous Nitroplus projects. As part of the collaboration between Nitroplus, EXAMU and the publishers from Marvelous, the console release also added two guest characters, Aino Heart from Arcana Heart and Homura from Senran Kagura. Although the combination of many well-known titles is a major part of the game's appeal, its solid gameplay allows it to stand on its own. If you consider yourself a fan of anime fighters in general, you will be able to enjoy it even if you don't recognize any of its characters.