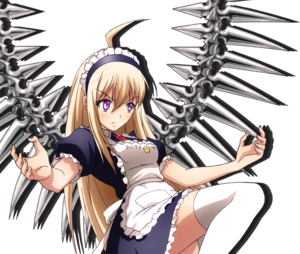 Anna
My duty is to be of use to my master.

Debuted in: Gekkou no Carnevale

Introduction: An automata that was found in the dumpster with no memory. Even though she is artificial, she has a hard time learning, takes her time, and is clumsy, but she has a hard-to-hate personality. When she engages in battle, she wields silver stakes called Vernier, as they take shape like wings.

Primarily a zoner. Has a hover dash similar to I-no or Morrigan. Although her zoning is an important part of how she is played, in close combat, she has a strong high/low mixup due to her hover dash. As a downside, her projectiles can easily be dealt with via escape action or vanishing guard. Since she has no meterless invincible reversal, she has limited defensive options in close combat

The 6A is the most important part of these combos, so you don’t even really need to do the throw starter as long as you land a 6A to begin the route

mostly impractical combos, due to being hard to set up and Mugen being a really weird assist, that no one uses in serious matches

Primarily focus on using your double jump and cancel into air escape action to avoid getting hit. While escaping in the air, you have a wide range of ranged attacks to use before you have to enter close combat. When in close quarters, f.B is a good tool to use. Approach the opponent with your hover dash and mix them up with instant overheads, empty dash low 2B, throws, et cetera.

You don't have particularly good defensive options with this character, so counter-raid is a good way of safely getting out of pressure.

Level 3 is great against aggressive opponents on hard reads. and moves you know will hit but with delay such as dragon and zombie assists.

214x is good against projectiles and most assists on read.