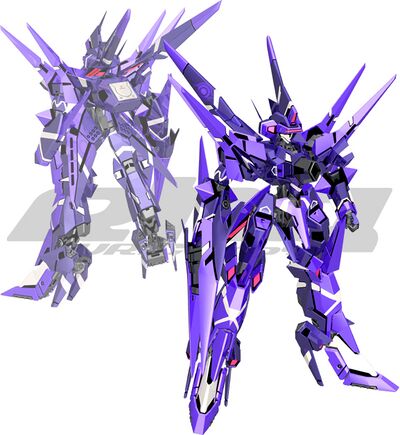 Virtuaroid with the highest class in air mobility in exchange for defense. Its high attack performance allows it to perform two attacks while dashing in midair, keeping opponents at bay with ease. You can deal great damage even to heavyweight opponents by hitting a rush attack in fighter form.

Standing RW has no recovery animation. When landing from the air you can cancel landing freezes by inputting RW on the landing frame. This way you can continue to an action like jumping or dashing almost immediately.

Start a forward airdash and perform CW as the second attack while the CW gauge is around 76-82% gauge.
You will get the speed boost tied to the move without firing the projectile or consuming ammo. A useful but situational tool since often you want to dash CW just for the speed boost.

Cypher moves at a high speed during the dash cancel of a horizontal dash. You can repeatedly dash cancel horizontally for some decent movement speed. Bal-Bados has a similar technique.


Cypher will move horizontally at a high speed until crouch is released. Same applies for matching directions to the left.
In addition to walking on the ground can be performed in various situations like during a whole jump attack (input at the start), during a crouch attack or when falling from a jump.

Horizontal walk speed utilizing rowing is significantly faster than Cypher’s ground dash. His jumping attacks become much more effective when using rowing during the attack and / or the following descent. Grounded daggers can be displaced by rowing for a split second before attacking, making opponents unsure of their position.

During jRTLW or jLW turbo turbo rotate to the right while the attack is active. The dagger pattern will turn into a smaller cluster with much smaller gaps.

Input an attack (say RT attack) immediately after inputting RW (vulcan). The attack will come out without any startup. This includes melee attacks if the RW weapon is not in melee range. Timing is more strict for projectile attacks.
For melee range this can be used on purpose by rotating or moving a bit to the right of your target. RW into instant CW melee is a strong technique. Difficult to use in practice.

Input / mash cRW while opponent is approaching or landing in front of you. You will perform an instant cRW melee out of the crouching vulcan.