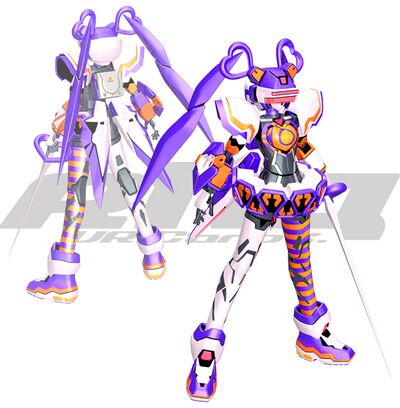 Virtuaroid that makes up for low defensive capabilities with top-class mobility and a variety of attacks.

Harass your opponent with quick movements and constant attacks to gain an advantage in both ranged and melee battles. After taking a certain amount of damage the true performance of the unit is released, significantly increasing attack power and mobility.

Instant cancels from LW and cLW

Fire standing LW and immediately input any other neutral attack. The LW attacks recovery will immediately cancel into the other attack. If using RTLW the followup will consume no gauge.
The same technique can be done from cLW to other crouching attacks.

Stop moving intermittently during walking RW and you can continue firing constantly until the weapon gauge is drained.

After landing jLTLW you can combo into RTLW on landing to cause another stagger and extend the combo.
RTLW is often best comboed into CW melee as it is multi-hit. This allows for instant kill combos.

Fei-Yen gains the highest damage and knockdown reduction during the approach of her melee attacks. As usual the reduction is increased during crouching melee.

If you are about to get hit you can perform cCW melee for a massive damage reduction. Or use cCW for the approach phase and cancel into another attack for example by dialing cCW -> CW.

Fei-Yen will walk backwards at high speed. Very effective for gaining distance on your opponent while keeping current facing.

During hyper mode the startup of normal CW projectile has invincible frames. Cannot be hit by projectiles for a moment.