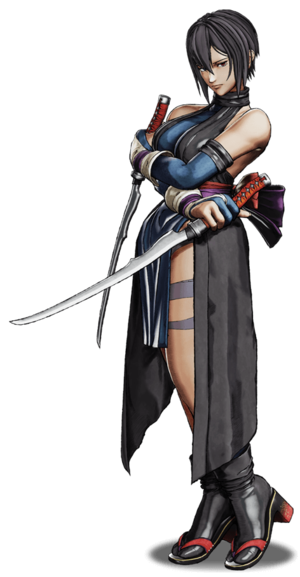 Shiki is a relentless rushdown specialist, who can keep her opponents on their toes constantly between her great mobility options and simple, yet effective mixups from close range. She’s the most extreme of the rushdown characters in that she has almost no options from farther ranges, which means she has to constantly force her way in to apply her mixup game.

To achieve this, Shiki has access to some of the more unique tools among the cast. She is one of the few characters with a far special-cancelable button in 5B, which helps her neutral game immensely. Her teleports are fast and can be used as an alternate way of moving around the screen. Her SSM is also insane. It tracks anywhere on the screen, essentially giving her a free 65% punish on stuff most characters couldn’t even punish in the first place.

Playing the neutral with Shiki can be awkward, since she lacks range on her buttons and Shiki’s heavy slashes are very situational. While she is quite fast, she has no “get-in-free-card” she can abuse, so she is forced to bet the farm on a lucky jump-in or a reversal DP sometimes

Shiki's primary gameplan is to get up close to her opponent with her fast movement and apply pressure with fast normals and a variety of high/low/throw options. Taking gambles is natural as a Shiki player since she lacks regular access to big range or safe full screen options. Learning when to take a risk with her mixup options or jump ins and when to play safe are important to being successful.

Her dash speed is among the fastest in the game so making use of dash stop (664) is a good way to approach your opponent. Dash stop normals like 6645B are good options for getting in. Spaced 66D is also a very safe on block option when spaced properly. Teleports can also be used sparingly to teleport you past certain moves such as some projectile WFTs or large fireballs (ex. Yoshi sword wave).

Jumping in is risky of course, but finding opportunities to jump at your opponent with j.C (her biggest air button) can immediately start her mixup game if you're successful. Watch your opponent and see how they respond to anti-air situations to find an angle to jump when they're not expecting it.

Shiki does not have the biggest buttons in the game so it's important you get as close as you can to make use of her normals. 5B, 2A are strong options for poking given their speed/range. 5C and 2C make good whiff punish tools when used correctly.

She has a variety of anti-airs that can cover most jump in options. 623B/C are the most obvious for being head-invincible. 5D, 6D, 5A, and 2B also have usage as reactionary anti-airs. She doesn't have very strong options for anti-airing cross ups since most of her anti-air hitboxes are above or directly in front of her. Instead considering dashing out/run under your opponent and then using 66C to auto correct to the opposite side to beat cross-up attempts.

Her air-to-air options are not as strong as other characters considering how j.A/B are fast but very short normals and j.C is too slow to air-to-air faster normals.

n.5C, 5C, and a well-spaced 2C can all be recoil cancelled into 22A on block to remain relatively safe. This rarely allows you to punish your opponent's punish attempts due to the long recovery on the teleport, however.

Recoil cancelling into 421X is a good way to catch your opponent off guard with an overhead. Mixing in her low options and her command grab 214X to condition your opponent is important to her mixup game. Note that any mixup attempt can be punished on block and also interrupted with a fast normal before the special comes out.

Her only option from full screen which can track a grounded opponent anywhere on screen. At all times you should be looking for your opponent to whiff a long recovery normal or fireball to punish them with her SSM. Using backdash to bait a move and then whiff punishing with a buffered SSM can be a very effective strategy. A well timed SSM punish can easily win you an entire round. Holding onto SSM can also sometimes be very useful and may force opponents to limit their usage off certain options from full screen (Ex. Keeping SSM can scare opponents to avoid using fireballs until you actually spend it).

Remember you only get ONE use of this. Make sure it lands!

Most of her okizeme consists of landing safejumps or cross ups with j.C. She can also effectively chase techs with her teleports and dash speed. Mixing in 421X as an okizeme tool can create ambiguous left/right scenarios as well.

For a full list of mixup options refer to the mixup document: https://docs.google.com/document/d/1sIXXHN3Rabmb5kdp0EQ4BYrSpRv1AJGJjym_ukODoiA/

Unless otherwise noted, the "recovery" section on most moves refers to the move's total duration, and not just the recovery frames.

* All of Shiki's other normals are identical regardless of proximity.

Note: 2B does more damage than 5B but a microwalk is needed on most characters that aren't Tam Tam or Earthquake making it more difficult. It is however very easy in the corner.