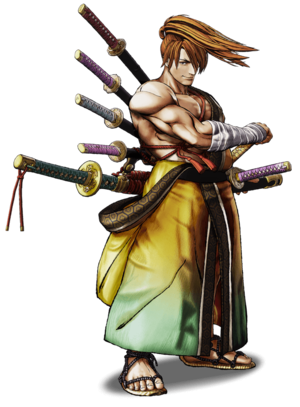 The truest definition of a “Jack of all trades, master of none” -type character, Yoshitora comes loaded with specials for just about every situation and must make use of all the tools in his kit to be played to his full potential.

While every move in Yoshi’s arsenal has some use, there are a few stand-out examples: Yuugao is finally a real command grab, which nicely complements Yoshitora’s close range game. j.C is a powerful jump-in with an awkward hitbox making it very difficult to anti-air for some characters. It can also cross up. Lastly, if you manage to use all your specials (or your SSM) during a round you get access to Yoshitora’s seventh and final sword - Yuuchouka. A towering, full-screen projectile that is basically next to impossible to win against.

Yoshitora can be played in a variety of ways. He doesn’t really have any glaring weaknesses except the fact he loses a huge part of his moveset when getting disarmed. His multi-hit attacks are also quite easy to JD, so you need to be careful when on the offensive.

Yoshitora is a Swiss army knife of a character with just about everything you could ask for -- strong combos and punishment, good defensive tools and no shortage of ways to call your opponent out on their obvious tendencies. The only issue is that all of his tools tend to serve far more specific purposes than those of most other characters, which demands that players have a good understanding of what each of his moves are, and what they are used for. Compounding that, none of said tools are very safe, so he relies quite heavily on making much harder reads than most other characters have to.
All that being said, if you make the right read and know which tool is best for the occasion, you can scare people into submission, giving you a chance to run his surprisingly scary mixup game.

Unless, of course, you manage to unlock Yuuchouka. In which case, show 'em the true power of the Shogun.

Yoshitora unfortunately lacks the safe long-range poking he once had due to B Nadeshiko now being significantly less safe on block, so he needs to think more carefully about how to find his way into the mid-range where he can more easily threaten people with his pokes and mixups. He mostly wants to do this by using his fairly strong movement tools -- in particular, his fast jump arc and big, annoying jC can give plenty of characters a hard time stopping him from approaching. A riskier way to deal with your opponent's attempts to stop your advances is in Tsubaki -- while the move is very punishable if you guess wrong, the auto-guard on the hop forward can catch people pushing buttons and get you a flower towards Yuuchouka.

Once you find yourself closer to your opponent, you can start to run your suspiciously Ukyo-esque mixups. Kara Botan (5BC~j236S) gives you access to a strong, hard to see overhead, which is only bolstered by strong lows of varying levels of safety (2D, 2C, A Nadeshiko) and a very strong grab game thanks to powerful grab combos, and a very threatening command grab in Yuugao.

If he finds himself on the defensive, he has no shortage of tools to keep people off him -- he can use 2B, C Nadeshiko and Shiraryuri to shut down aerial approaches, and the latter even works as an invincible reversal if you're willing to take the risk.

Finding opportunities to deflect is especially good for Yoshitora, as he arguably has one of the best deflect games out of the entire cast. While most characters are able to get some kind of strong punish, or even a Super Special Move from a deflect, Yoshitora benefits heavily from this as landing his SSM grants him access to Yuuchouka for the rest of the round, allowing him to very easily close it out. On top of that, Yuuchouka itself is also guaranteed from a deflect, and landing it in full does just as much (if not more) damage than a SSM.

Yoshitora's okizeme can be whatever you want it to be. While a knockdown is an excellent opportunity for him to apply his high/low/throw mixups, he also has the tools to play a more reactive game based around calling out the opponent's tendencies after waking up.
If you want to take advantage of his mixup game in the corner, you can go far by copying Ukyo's playbook -- harass the opponent with 2D to condition them into blocking low, mix up with kara Botan for your overhead and either run up normal throw or command throw depending on what you want. Bear in mind, however, that as Ukyo-esque as your mixup may be, it is not Ukyo's mixup. Kara Botan, while an excellent hard-to-see overhead, is slightly slower than Tsubame Gaeshi and does not catch jump very well at all, so you will need to be ready to hard call out the opponent's attempts to jump out of your mixup, which you are certainly not lacking in options for.

As powerful as Yoshitora's seventh sword may be, it is not without its limitations. Outside of it needing to be unlocked by landing all of your other special moves or your SSM, if you unlock it, it will only be available for the round you unlock it in -- you'll be back to zero as soon as the round is over. However, there are a few subtleties to Yuuchouka's unlock requirements that gives his kit a whole extra layer of strategic depth.

The easiest and quickest way to unlock Yuuchouka. The most consistent ways you'll be getting SSM to land is more or less the ways everyone has -- deflect or spot dodging a throw. Because SSM does so much damage, and Yuuchouka does even more, the main strategy here is to use Yuuchouka to close out the round. Because you'll only have Yuuchouka for the round you land SSM in (on top of only getting one SSM per match), it's a good idea to save this strategy for the second or third round where it will win you the match.

Here's where things get interesting. While Yuuchouka is only available for the round it's unlocked in, Yoshitora's flowers (i.e. the special moves he's already landed) carry over between rounds. For example, if you land four of Yoshitora's special moves in the first round, you will only need to land the remaining two in the second round to unlock Yuuchouka. This gives you room to think about saving certain moves for the second round to score yourself an early unlock and get the opponent scared of your big new toy. On top of that, post-round special move hits count towards the unlock. While very niche, this is a very nice option to have for landing your more difficult to use special moves. Think getting the kill with n.5B and then buffering a cancel into Tsubaki.