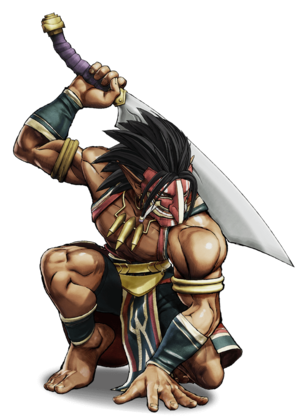 Green Hell's sacred warrior returns to Japan to retrieve his tribe's lost magic 8-ball. Without it, they may never know whether Cham Cham, too, will eventually be added to this game.

Tam Tam is best described as a “gambling” character of sorts in that much of his damage output comes from putting the opponent in extremely risky 50/50 situations where they have to guess between his low-hitting attacks and his powerful j.C instant overhead. He additionally sports a command grab in case the opponent is getting a bit too comfy down/backing in his face.

Tam Tam’s zoning toolset is very competent too: 5A is a great and annoying fast poke. His high and low “fireballs” can chain into each other up to three times and Tam Tams’ flame pillars and fast, far reaching air-to-air normals can keep the air space locked down without much effort. Tam Tam’s mobility has also been vastly improved since Vsp, with a fast run and a backdash that’s actually usable.

Going into Samsho 7, the biggest nerf that Tam Tam got was to his damage, as his mixup options and command throw generally don't hit as hard as they used to. Tam Tam is also very reliant on being in control of the match at all times, since he can’t handle being on the defensive at all.

Close B into three skulls. The skull inputs have to be done pretty fast, but careful to not mash them out too recklessly or you might get 623B instead

WFT can whiff if you're too far away

Stricter timing than 5B but possible

Link to TamTam videos and specify year it was produced or patch version in brackets.