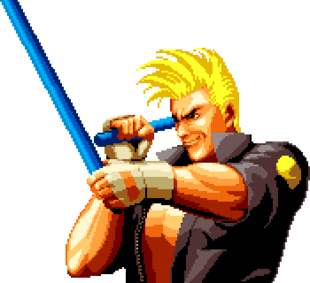 Rody Birts is a cop with a cool attitude that doesn't mess with anybody, and his batons will make sure you know that he means business. Being a rushdown character, he's pretty fast and packing pretty solid mixups out of his pressure. Rody can either go for his double sweep out of 1BB, or blindside foes with his 6B launcher that hits overhead. Add this on top of his straightforward, highly damaging combos and Rody can quickly swat rounds off the match, acting as a constant threat on okizeme. Why Rody is packing double batons is beyond us, but he most definitely knows how to weild them. He easily stands out better than most characters in the Art of Fighting series thanks to his aggressive playstyle.

That's not to say Rody doesn't have at least some flaws. Although he carries his momentum incredibly well, he can lose it quite easily from one bad read since both 6B and his 1BB sweep have steep recovery, especially 1BB which leaves him at somewhere lower than -20 on block. Ouch! If the opponent can consistently look past his mixup game, then Rody's fighting an uphill battle where he has to play a lot more respectfully, despite lacking good defensive tools. And against Ryo, Rody has no choice but to zone him out or else suffer a deadly death combo, as a character who cannot zone well. Look past his shortcomings though, and you have a character who refuses to play fair and will always charge in to apply deadly pressure.

You have ample time to dash up to the opponent after the knockdown regardless of if they quickrise, and you get to start your nasty setplay. Rody’s rush chains are unique in that he has both an overhead launcher, and low sweep, both with the same timing. Your main mixup is a blocked 6AA leading into the 6BB launcher string, or 1BB sweep string. Either of these options lets you dash up and continue to do it over and over until you need to recharge your spirit or the opponent dies/breaks out. Not to mention that nifty command grab you have to mix it up even more. That said, if the opponent guesses correctly on the mixup, Rody will crumble, especially if his 1BB is blocked, which leaves him at over -20 on block despite its other great benefits. If otherwise not trying to force the opponent open with his 50/50, Rody has really simple but effective combos that are essentially just variations of the same combo, so he's easy to learn. Rody's problem lies in when he's being pressured back, since he has great tools for combos and rushdown, but outside of that has to rely on stray pokes and wonky special moves, most of which don't carry much defensive value. His damage output is average without combos, too, but it shouldn't undermine his ability to force the opponent to guess and otherwise eat swift pressure. It should also be noted that while 6AA is good pressure and will still give him room to apply his 50/50, careful opponents can just 4C parry Rody and kill his momentum, so you should sometimes apply the 50/50 without 6AA just to be safe.

Regarding Rody's wonky specials, his projectile is a huge risk up close and should only be used from afar. His 236B is combo fodder at best because in neutral, Rody has a bunch of other better punish tools at his disposal, so there's little reason to use it. His "command grab," is an enigma half the time in how you land it, so when it does work, it's great at opening the opponent up for free, but it largely depends on how close you are and if the opponent is in an optimal position, so bad timing leaves Rody wide open. His super isn't bad, but it's lacking in range and isn't fast, but it's slightly faster than Kasumi's super. It also packs more range than Sinclair's super does, but it's generally difficult and awkward to land.

Rody does quite well generally speaking, but suffers bad matchups against Kasumi and especially Ryo. Rody's whole game structure gives Kasumi more than enough time to punish any failed attempts to open her up while also being in just the right range to eat the worst of Kasumi's pressure. Against Ryo, Rody has no choice but to abandon his rushdown strategy almost entirely because one mistake can lead to Ryo landing his infinite on Rody, who is one of only two characters in the game that it works on (three counting Wyler). Outside of this, he has pretty decent matchups, but some characters such as Karman don't struggle too much fighting back against his pressure.