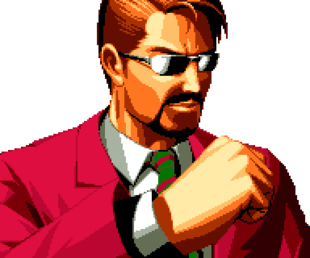 The snazziest looking man in the whole game. Karman does not bring a lot to the art of fighting table, but what he does bring is some meaty, solid pokes and a cool attitude to show that he means business. He's a fairly peculiar character, seeing as he has very few combos in a game full of specific combos to learn, but instead focuses on a general gameplay of poking until he scores a knockdown, and then following up on inescapable setups for his damage. This is thanks to his instant Pursuit and his throw based super which is particularly nasty to unsuspecting foes.

Karman may hit hard, but he never took the time to learn how to hit low, thus making his low game very weak. He also doesn't like launching the opponent upwards either outside of one move, making his combo game also miniscule compared to others, and while he hits fast, he takes awhile to recover from each strike. He's heavily dependent on keeping the momentum where he can continue scoring damage off of his Pursuits. Despite lacking in key areas, he's still snazzy and always makes sure he looks professional as he kicks your ass. If you want a character who hits hard and looks cool while doing it, try giving Karman a go.

Karman isn’t exactly a combo character; all he really can do is 6AA6BB (which to be fair does more than enough damage). He’s focused more around poking the opponent with his strong normals and whiff punishing with 2146A and 646A, and threatening the opponent with command grab when in desperation.