Relative to a DS, the controls are as follows:

Attack+Attack=Grab (can be done in the air)

A motion + an attack will result in a SPECIAL or SUPER based on the character being played. 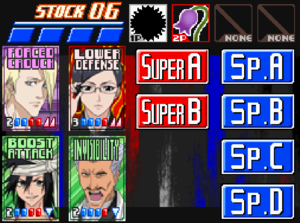 These Specials and Supers can also be done by tapping the shortcut on the DS's bottom screen. However, these are NOT RECOMMENDED for use for the following reasons:

The touch screen also offers use of the Deck/Card System. Cards are NOT ALLOWED in tournament and competitive play. They are random, and are extremely unbalanced.