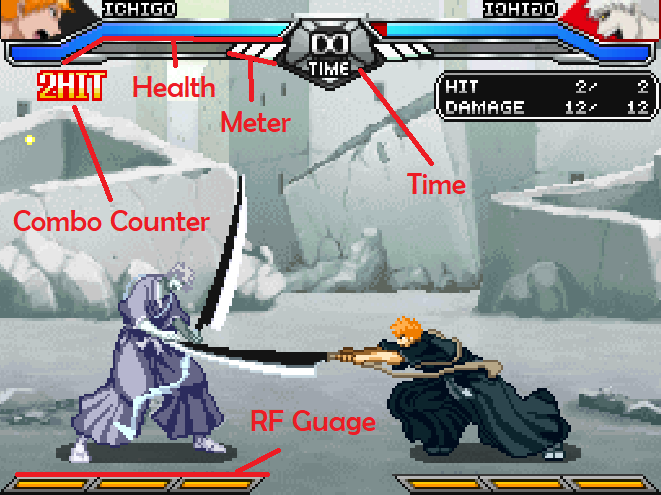 Bleach DS uses the standard FG health system. However, the universal health value is 255 and each character differs in Defense. The list below will show a character's defense bracket based on how much damage they take by Ichigo's LMH magic series. This is in order of Most Defense to Least. Lower Damage = Higher Defense.

Special attacks and Supers can be done by inputting a specific motion then pressing an attack button. Specials can be done at any point, while Supers require 1-3 meters to do. Most Specials/Supers consist of 236, 623, 41236 and 22 motions. (Notation) Example: Ichigo's 236L.

Specials and Supers can be done in reverse to output the same special backwards. Example: Renji's 641236H being done in reverse (463214H) within a combo, in order for it to hit.

If the Heavy version of a Special is done, it will result in the EX, or in this game's terms, 'RF' version of the Special. This will take both an FS bar and RF bar from your RF/FS Guage but only requires an RF Bar. (see RF/FS Gauge section). This will usually either increase the damage or speed/framedata of the special. Example: Hollow Ichigo's 236H (RF)

ichigo's 236h RF-Increase in Recovery and Startup. No difference in Damage or Range

Some specials however, are RF only or RFO. In that they cannot be used without the requirement of an RF bar. Eg. Byakuya's 41236x.

In this game, the maximum amount of meter that can be acquired is THREE (3) Bars and it is used for SUPERS and DAMAGE CANCELS

Level 1 Supers, usually being SuAs and SuBs require one (1) bar of meter. While Level 3 Supers, which can be SuB's or SuC's require three (3) bars of meter. Example: Renji's Level 3, which was previously shown in the Specials and Supers Sub-section. 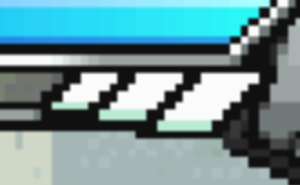 Bursts or Damage Cancels require 1 meter. They are used to exit combos, pushing the enemy off of you with a discharge of spiritual pressure. You are invincible for an extremely short period of time after bursting, enough for you to be able block again. However, they have very limited range, and flash steps are immune to them.

Flash Steps function as teleports and at the same time roman cancels. They're used to extend combos, better movement, mixups and evasions when blocking. All normals can be cancelled into a flash step on hit or on block. An example of a Flash Step:

There are 5 Types of Flash Steps:

MOST flash steps have an incy bit of recovery and can be easily punished by meaties.

MOST flash steps are immune to normals but aren't immune to EX moves. Every flash step has a different range and speed, so make sure to learn them all as they can affect nuetral and combos to a pretty large extent.

When you use an FS bar, it will recover quickly if you are standing, crouching, walking or running on the floor. If you are attacking, or in the air, its speed will be reduced greatly.

FS bars will only recover if the RF bar its within is filled. RF bars increase extremely slowly and unlike FS bars, the speed cannot be altered via a change in state.

Grabs can be done on the air and on the floor and are used to punish blocking attempts. The universal grab input is attack+attack. Menos grande is the only character in the game who does not have the ability to grab but at the same time lacks the ability to be grabbed aswell. Characters have a specific amount of grab invincibility on block, on hit and on wakeup, making tick grabs a very difficult act. Every character has a different grab (most of the time in terms of frame data.) Most grabs will cause wallbounce, some will launch and some do more damage than others.

Guard cancels can be done on block to avoid and escape pressure and to punish attacks. There are three types of guard cancels.

Normals cancel into each other on block and on hit universally using the zig-zag magic series. This being:

In the air, normals can chain together via the regular magic series. This being:

All normals can be cancelled into a flash step, special or super.

ALL non-projectile specials are super-cancellable.

When knocked down, you have the ability to:

Timer: Player with the most health wins. IF there is a tie in health points, it will be considered a draw and the match will end.

Rounds: All matches are 1 round.

Jump height, speed, damage and defense will differ for every character.

You cannot die from chip in this game.

Super cutscenes can be skipped by pressing START.

Lines and Cards: Aren't used and can be disabled when creating a room.

Touchscreen Shortcuts: Can be used but is not necessary and can actually be detrimental.