You will notice when selecting your character that there is a password option.
That’s right, Red Earth has a password system! This usually only comes to play when going through the story mode as you earn moves and damage resistances when you level up while playing through it. You will need to know your character’s level 32 password in order to obtain all the quirks that come with each character. These can be found on their respective wiki page. You won't need to input the password more than once as long as the continue timer does not go to 0 if you lose.
In order to input the password, you must use the punch and kick buttons. If you make an error, you can press "Left" to go back and fix it.

This is actually useful as it will help you learn the notation!
That’s right Red Earth has its own notation, based on the password screen!
Observe the graphic: 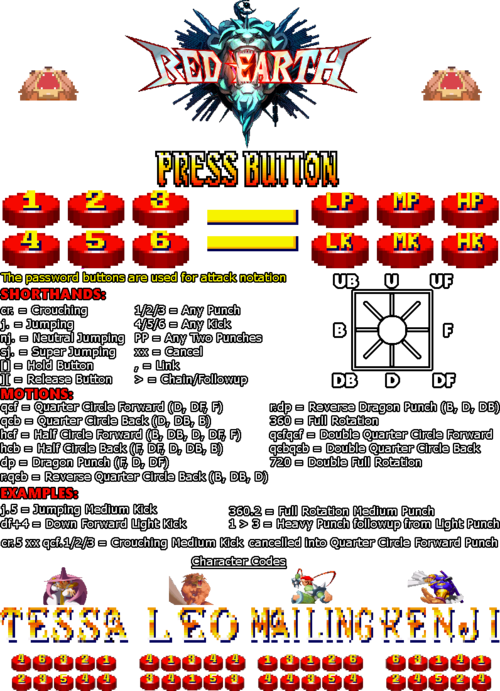 When you input one kick and one punch button of the same strength (i.e 1+4, 2+5, 3+6) your character will begin to flash red for about a second. During this animation, if you are hit by any move (except grabs), your character will automatically "parry" the attack regardless of direction as well as nullify any chip damage (which is important as you can die from chip damage in Red Earth). If you are not hit however, your character will go into a lengthy recovery animation after the red flashing where you are likely to get punished with the most damaging combos in the game. It is important to note that you can perform an ultimate guard even during regular block stun, which is a good way to prevent guard breaking. Lastly, you cannot perform an Ultimate Guard while airborne, so you'll need to watch out for chip while jumping.

When you are in the parry state during Ultimate Guard, you can perform an Ultimate Counter. This is done by inputting reverse qcb.1/2/3 or reverse qcb.4/5/6, with the kick variants of the Ultimate Counter generally causing knockdown while the punch variants are usually used against airborne moves. Use these Ultimate Counters wisely, as they can either be the reason for your victory or defeat. It is important to note that you are not invulnerable while performing the Ultimate Counter, so multiple hit moves that are independent from the opponent such as Lighting super will still hit you if your Ultimate Counter is mistimed.

When in block stun, if you take too many consecutive hits without ultimate guarding your guard will break and you will be temporarily stunned and incapacitated for a couple of seconds or instantly if your guard is broken while airborne. While generally it’s not too much of an issue when grounded due to how quickly you recover, it can be a problem in the corner or when you are in the air and are caught out by an elemental super that attacks airborne opponents. It is recommended that if you are low on health that you do not jump around too often against an opponent with multiple orbs, as it will most likely cost the round.

Almost every single move in the game can be blocked in the air, meaning that there are no true anti-airs. However as mentioned in ultimate guard, you cannot perform an ultimate guard while airborne so it is easy to either get chipped to death, juggled or get Guard Broken. This ensures that constantly jumping around is not too overpowered.

Dashing is performed by inputting forward twice. Each character has a unique dash speed and properties, be sure to check your character’s page for more details.

Super jumps are performed by inputting down just before you jump, which results in a super high jump that grants you greater freedom of movement in the air compared to standard jumping. During a super jump, you're able to steer back and forth as you please, as well as perform multiple airborne attacks. Some moves can only be performed when super jumping, e.g. Tessa’s divekick.

Every character has at least one throw which is performed by inputting forward and an attack button (some characters have button-specific throws). Most are generally techable by inputting down or forward at the right time depending on the throw, with some throws having two points where they are techable. Let’s take Leo as an example. He has two throws, a 2 throw and a 3 throw. The 2 throw can be teched almost immediately by inputting forward right as you are grabbed and you will take very little damage. His 3 throw however must be teched instead by inputting down just as you make impact with the ground, which is called "softening". A softened grab will allow you to land on your feet, and the damage received will be reduced, albeit not as much as a fully teched throw. Each throw has a specific way to be broken (either teched or softened), the details of which are explained in this video:

Some throws have a strange property that allows the character that was thrown to be thrown again as an OTG, effectively looping the victim with throws if they aren't teched. Every character has a throw loop, some corner specific some not, and if you do not know how to properly tech throws you will be in trouble so be sure to learn the techs.

Every character has a pursuit attack that can be performed by inputting up and any kick button while the opponent is on the ground or launched in the air. Each character's pursuits have different speeds and qualities, with Kenji’s being the slowest and Tessa’s being the safest. If you time your pursuit too slowly your opponent will wake up and possibly be able to punish you.

Each character can perform a roll in any direction on wakeup by holding said direction. This is important as if you are not careful your roll can be read and subsequently be meatied. Sometimes it is best to not roll at all in these situations. It is interesting to note that only Mai Ling can alter the duration of her roll out of all the playable characters, making her difficult to okizeme.

If you take too many consecutive hits, you’ll be at risk of getting Dizzy. While you are dizzy, you’re completely vulnerable to your opponent’s attacks. You can’t move, block, attack, or ultimate guard. Each hit increases the stun meter by a random amount, and the size of each character’s stun meter is different. After a character has been stunned, their stun meter will increase for the rest of the round and reset at the start of the next one. Mai Ling has the smallest stun meter followed by Tessa, then Kenji, then Leo. There are three types of stun: duck stun, star stun, and fake star stun. Duck stun lasts the longest giving the other player plenty of time to set up their follow-up combo. The regular star stun lasts shorter than duck stun, and the fake star stun is just that: fake. When a character undergoes fake star stun, they will immediately shake out of it and be able to perform actions. The type of stun will be random.

Performing supers in this game require spending “orbs” which will randomly appear in chests after a character gets knocked down. To open a chest, either hit it with an attack or press down while over it. An orb of a random element will pop out that you can collect. You can hold up to 3 of these. The supers can be character-specific supers or universal elemental supers done by inputting qcb.PP. Each orb will be one of six elements: fire, ice, wind, lightning, poison or meteor. You can cycle the element of the first orb by pressing Start. Each elemental super has different utility, although lightning and ice are commonly regarded as the best. Each super has a startup hitbox that covers the area in front of you making for good reversals, and supers can be mashed for extra hits or faster activation.


Having an orb advantage over your opponent is important, you’ll be able to threaten them with guard break if they choose to jump at the wrong time. Denying your opponent orbs is a critical part of high-level play. There will come moments where you’ll have to make the decision to continue your offense or to hang back and collect the orb either for your own supply or to keep your opponent starving.