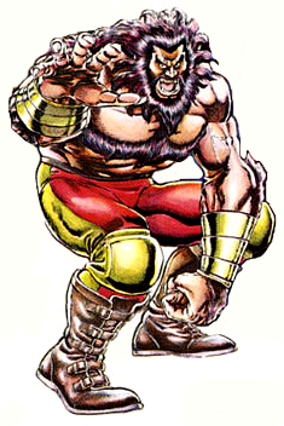 Mon, you gots no rhythm and you fight like a girlie.

What would a Capcom character be without stereotypes?

The walking embodiment of a random chimp event, King Rasta Mon is canonically illiterate. He relies on his monkey manager Freak to do the boring work for him.

While he has a shorter grab range than most characters, Rasta can depend on his speed and ambiguous cross-ups to get in and make opponents guess. His specials are awkward to use or niche, outside of 236LP and 28P. Monkey assists keep your opponents locked down and can open up big rewards if you time it right.

not yet added, oops!

A basic chain into grab. You can always go for a super slam, but it's also techable

Ending with sweep is much easier, but 66LP does more damage. Both knock down, which is good.

Point blank, you can connect 2LP 3 times. From further out you might get only 1 or 2 before ending.

You can combo hit 2 of n.5HP/2HP into grab even outside of the corner, although it's hard (maybe character-specific?). You can always cancel hit 1, too.

Same as the first combo above, but with a jump-in starter.

The holy combo that invents an actual use for 46P. Demonstrated here.