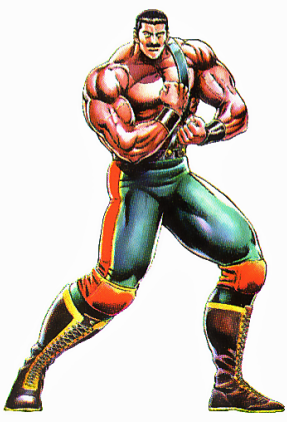 "They keep sending boys into the ring instead of men!"

Mike Haggar, known across the globe as the funny pipe man and the Mayor of Metro City, started his journey to Mayorship as a pro wrestler in the CWA, inspiring up and coming wrestlers like Biff Slamkovich and Gunloc during his time, before eventually retiring and running for election in Metro City; history speaks for itself from there.

Haggar is a deceivingly simple character to pick up and play, that has many tricks up his (lack of) sleeves for players who choose to stick with him through-and-through. Sporting consistent very high damage, all kinds of great normal attacks from disjointed mid-range pokes to excelling anti-airs, versatile special moves and a heavy emphasis on the game's Run Cancel mechanic, Haggar is a very powerful and appealing beginner's choice.

Also, get used to seeing Haggar's 66LP; it's really good.

EDITOR'S NOTE: Please read source comment on Special Moves header, and verify if these descriptions require re-writing. Remove comment and this note when done. Thanks