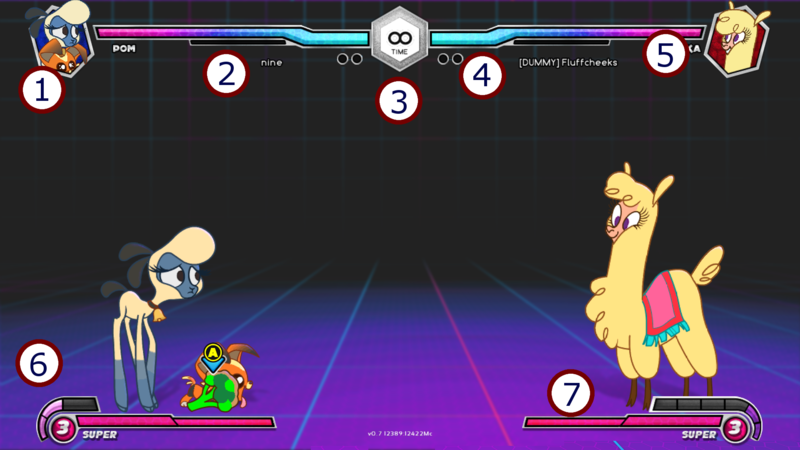 1 - Character Portrait, changes when getting hit.
2 - Juggle Decay Bar - This fills as the character is being comboed. Once it reaches maximum, it will turn yellow, and as the combo goes on, it will steadily turn to a shade of pink. The initial green bar represents each characters initial Juggle Decay value, which is increased per hit of each combo. Once it reaches the maximum of 380, the bar then becomes a representation of the character's Juggle Decay Gravity, which affects how heavy they are during the combo. See Juggle Decay for more details.
3 - Timer - The timer lasts 99 real-world seconds. Once there are 10 seconds left, the timer will flash red. Once it hits 0, the player with the higher percentage of their health bar will win the round.
4 - Rounds - By default, a player must win two rounds to win a game. Once circle will fill immediately once a character's HP or the timer reaches 0.
5 - Health Bar - A direct representation of your character's remaining percentage of health. There is no guts scaling in this game, so what you see is what you get.
6 - Magic Meter - The size of this meter is character specific. See Magic System for more information on each character's specific uses for this resource.
7 - Super Meter - The super meter holds 3 full stocks with two halves to each. Performing a super consumes 1 stock of this meter. Performing a Cross Canter consumes half of a stock.

When Attack Data is set to Advanced in training mode, two extra elements are added to the screen. In the center bottom of the screen, the startup and recovery of the previous move are shown. Along the top of the screen, information about every frame of an attack string is shown. Each column of boxes represents a single frame, and the colors mean the following: