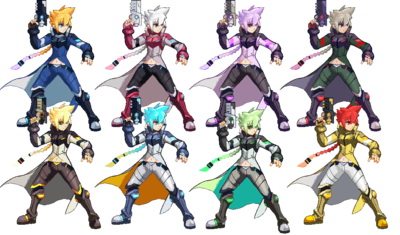 Gunvolt once had a friend. Then she became a fairy, and then a scientist started blaming him for literally everything.

With the lowest health in the game, Gunvolt may be considered the games glass cannon. While sacrificing health, he makes up for it in versatility in offense and neutral. He has one of the best projectiles in the game (5s), which you can shoot from full screen and follow-in to start your offense. On offense, he has good tools such as dash, air dash, 6HS which grants several options on block, and 5ES which grants him free extension of pressure with meter. He also has the unique move 2S which is the only meter building special move in the game, allowing him to force opponents to approach, or end his combos in meter building. The downside is that Gunvolt does not build meter while doing combos or running offense, something every other character can do. HE also has a unique marker system, which when an opponent is hit by any of his gunshot specials, a marker appears on the opponent, and the 6ES move will do more damage/allow for full combo.

Cons: Lowest Health in the game Lacks defensive options (EX counter which grants small reward) No invul level 1 or 2 super. Has a tough time in match-ups where his 5S is shut down and Gunvolt is forced to approach. Below average damage