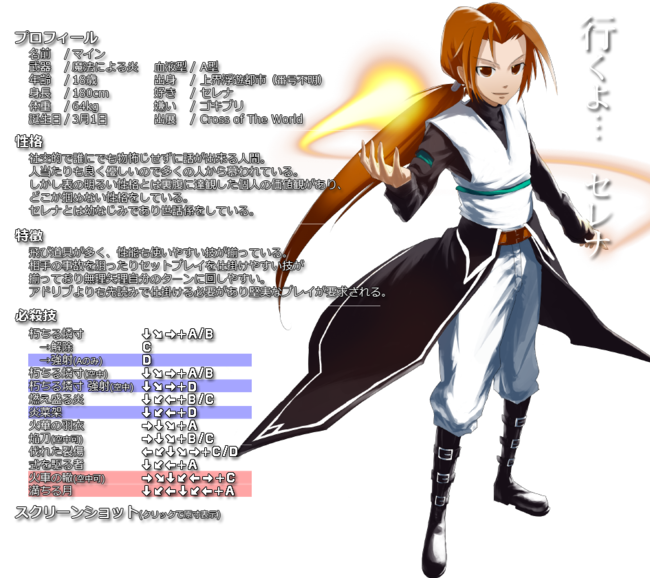 With far-reaching normals, projectiles that cover nearly every angle, and several attacks that linger on the screen, Main is best-described as a space-control character. Proper use of his tools allow him to hit most parts of the screen and threaten opponents from nearly anywhere. He also has several good oki options on knockdown and useful utility in the form of his Ex specials and Super moves, meaning he has something useful to do with his meter at any given time. In exchange for his nearly-uncontested reach, his cancel options are somewhat poor, and his mixup, while decent, requires that he sacrifice his range advantage in order to beat down-backing players.

-Pros-
+ Long range normals, both grounded and in the air
+ Strong antiair options
+ Has many options for oki with and without meter

-Cons-
- Not many jump/dash-cancellable moves make his pressure somewhat predictable
- Mixup tools have the worst range of all his attacks, requiring him to go in

Backdash
(44) - A short distance hop backwards with some invincibility.

Double Jump
(7) or (8) or (9) in the air - A second, shorter jump allowing for more air time or changes in aerial momentum. Cannot double jump and airdash in the same jump.