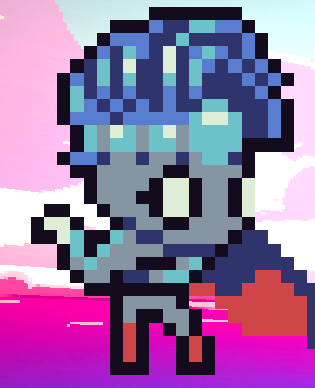 Aesthir on the character select screen

A strange alien-like being, Aesthir is a powerful zoner and "weird" character.

Being a mix between Guilty Gear's Venom and Melee's Falco, Aesthir possesses many ways to zone out opponents. Their 236 blaster is laggy on the ground, but when used midair it can be land cancelled for no endlag, making it very spammable. 214 sets an orb that can be hit to send it in a large variety of directions. Opponents can also hit these, but it will still be an active hitbox against them, making them great defensively.

Their biggest weakness is a lack of good reversals, and their inability to utilize mechanics of the game like dash cancelling well due to their teleport dash. They have generally weak offense as well, with weak mixups and generally low reward on their best close range options. While they have powerful normal attacks with great reach, many of their moves also possess large extended hurtboxes. 236D can force an opponent to block your mixups, but the pushback means your setups may be off. Aesthir is great for people who want a strong defensive character with great zoning, and are okay with lacking the same up close mixups that other characters possess.