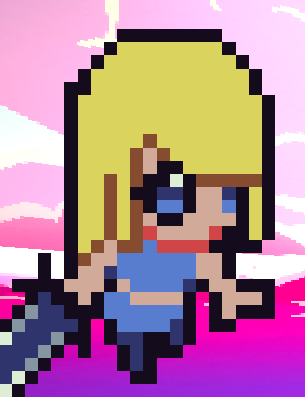 Seri on the character select screen

The sword-wielding lady of Combo Babies, and the go-to for people who like to mix opponents in a blender.

Seri has incredible speed, great reach on her attacks, solid and reliable combos, and great mixups using moves like 214B/C and j2C. Her combos often end in knockdowns, which allow her to airdash in and get her mix going. When playing neutral, she has solid buttons to press like jB and 2B, and can easily convert into her 236 specials.

On the downside, Seri has very limited damage and combo options. Most of her moves do relatively low damage, meaning she relies on being able to successfully mix an opponent to get wins. If you like being fast, having big buttons, and mixup heavy gameplay, Seri is a good pick for you.