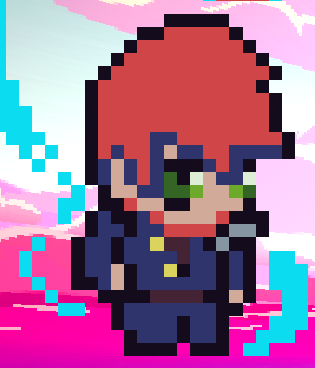 Ichiro on the character select screen

Ichiro relies on his great range, damage, and his summon to defeat opponents. Many of his moves easily hitconfirm, and with how much range most of them have, it can lead to extremely scary situations if you are fighting a good Ichiro. He has no shortage of neutral tools either, being able to close in on an opponent and start opening them up. His summon, tornado, is a powerful and controllable projectile. While it requires 50 frames of charge, if Ichiro gets it out it can dominate the neutral until an opponent destroys it or it hits them.

But, Ichiro has some weaknesses. For one, some of his moves have a deadzone, including some important moves in Ichiro's kit like 5B and j.C. Of course, there are ways to circumvent it (like 2A confirming) but it's something that can occasionally lead to death if you play wrong. Some of his moves also have bad frame data, making him hard to use if you don't understand most of his moves. It takes a different method of thinking in order to perform well, making him challenging to learn.