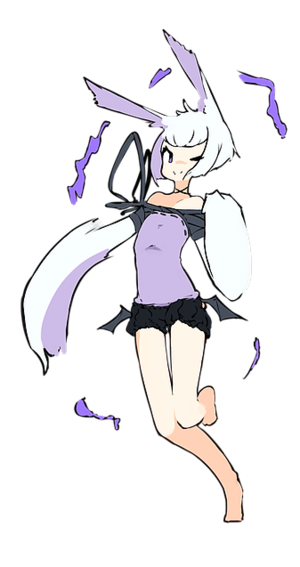 An unknown chimeric fusion of creatures who wields the power of lightning. She is fast, reckless, powerful, and frightening... a monster through and through, she revels in chaos and destruction.

She approaches opponents with blinding speed and beguiling doppelgangers, and strikes them with shocking attacks.

all her moves are kinda bad. but there's two of her. so they're all actually incredibly powerful and versatile

(Work in Progress)
go fast and shoot lightning
Addendum: While going fast, take care not to collide with your opponent's bullets.

(ToDo: Add Pictures)
One of the most versitile pieces of Stormbeast's kit and key in succeeding against any opponent. Generally you should always aim to have a clone active as the cooldown is lower than its duration.
The clone is most threatening when inside the arena, so try to avoid placing clones in undesirable positions such as outside the arena or in the wrong direction (if your opponent moves past you just before you cast it), as your opponent will have time to capitalise on you while you wait for the clone to come off cooldown.

Since it is undesirable for the opponent to move directly through the clone due to the risk of being hit by a wide or charged basic, you can place the clone between yourself and the opponent and use it as a detterant to create some breathing room.

By placing a clone on the opposite side of the opponent from your current poition, you can trap them in a pincer formation where your wide will generally confine them to a triangular space. Your opponent will also have to watch for attacks fired from behind while in this position, potentially making it harder for them to focus.

Because the clone becomes a threat simply by existing inside the arena, you can use it to deny your opponent of advantageous positioning (e.g. centre stage). However in doing so you might also deny yourself of perfered clone positioning for offensive techniques.

Run up to the opponent and give em a big orb.

By utilising charged basic and positioning, Stormbeast can setup checkmates and effectively trap the opponent against a wall, forcing a defensive special or a hit. Like most of Stormbeast's moves there is no catch all strategy. Using this technique effectively boils down to understanding the positioning of yourself, your clone and the opponent. (TBC)

Since Flashstep deletes bullets upon teleporting, you can tap-cast it to effectively clear all minor bullets around you (similar to using bombs in shmups). This allows you to get out of a sticky situation without giving up your positioning or risking being hit while casting. As a side note, the rubberbanding caused by this ability may briefly confuse your opponent.

Because of its superior range, Flashstep can be used to bypass a wall of obstacles and get Stormbeast out of checkmate or otherwise difficult to dodge situations. However also be aware that Flashstep has a long cooldown so you should not rely on it to get you out of every bad situation.

Flashstep can also be used to quickly close the gap between you and your opponent, allowing you to suddenly pressure them or follow up on other moves (e.g. teleporting in front of a charged orb). Because Flashstep has a tendency to rubberband, especially at higher latency, you may be able to tag your opponent with an unexpected wide or melee.