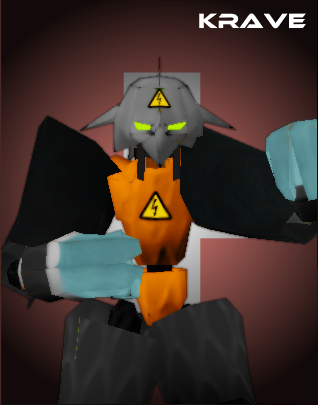 (this wiki will use the Neo costume as most game promo artwork has krave in his Neo form, and the silhouette is much easier to keep track of)

Krave Designed by a a joint venture between Encorp Robotics and Kreen Industries, the H-1XX line of military robots has gained popularity as the most reliable and cheap alternative to the SPECTRA Robotics VORS series (Versatile Operating Robotic System). The first batch of H-150 robots sported a simple yet effective build with sturdy components and an excellent durability, despite lacking some advanced AI features when compared to the VORS class droids. They were equipped with twin rotating arm-drillers and a set of plasma boosters for short sprints, which needed to be refueled after one minute of overall usage. Notwithstanding their shortcomings, the success of the line pushed the development of more advanced prototypes, in combination with higher-level AIs. The first instance of a H-168 sample was produced exclusively for the Euterpe Military Research Center, as an appendage of the Schwarzerblitz project. While mounting an old, standard H-150 chassis, the H-168 model synthetic brain was supposed to be installed on a dedicated, updated body after the end of the testing sessions. A prototype of the new body concept was commissioned but later discarded due to a lack of components and a sub-par endurance due to a rushed production. The H-168 AI was trained using huge data samples of human behavior, but due to the exposure to the Internet (especially to certain social networks), it started acquiring an extremely quirky attitude, tending toward sadism and inerent cruelty, with touches of a flamboyant personality, which identified itself as a male. The experiment was deemed a failure and "Krave" (as he was named by the personnel of the facility) was marked for dismissal. The night of the Black Lightning Disaster, a team of bounty hunters from the Crossbones collective infiltrated the laboratory, prompting the higher-ups to send all the available resources to stop them. This included the unfinished H-168 Krave, who was activated again and employed as a front-line weapon. There are only rumors surrounding that night, but it is said that the unit designed as H-168 Krave was destroyed by the mercenary known as "Der Wolf", while still being able to hold his own against his opponent. What happened to Krave afterwards, how he survived the Black Lightning Disaster and how he got his new body, is currently a mystery. However, some people claim that the answer to the last question is connected to the sinister hermit lurking in what's left of Northern Algol, where the ruins of Euterpe were dumped after the Disaster. Whether this is truth or just another story, it's hard to judge.[1]

Krave is a military robot with drills for arms that broke onto the internet. The result is about what you would expect: a sadistic, meme obessed killer robot that excels in the corner. Krave uses those drills of his for ludicrous offensive pressure to drag his opponent into the corner, then use those same drills to juggle and knock them around in the corner until they die. Krave has above average corner carry and midscreen combo damage using his large collection of impact moves combined with his ability to use multiple Impact Cancels in one combo, but really shines when he reaches the corner, where he can easily take off 3/4 off your hp bar without using any bullets. He also has very good oki using his 2T, spider stance. Despite these strengths, Krave does severely lack in the defense department, needing to use system mechanics to be able to even attempt escaping pressure placed on him. The result ends up making Krave a very potent glass cannon, especially when reaching the corner.

All T Moves go here, as well as moves that require a motion.