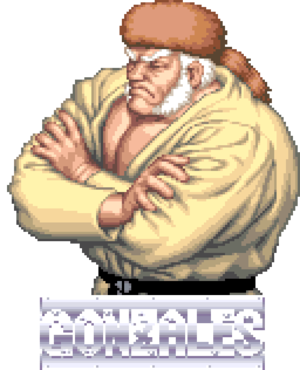 "Everyone's favorite Soviet Mexican Mountain Man Judo Master from West Virginia" or something. This guy's all over the place. If you couldn't tell by looking at him, he's the game's grappler, and one of the most extreme characters on the roster.

works at a specific range where 2LK is safe from DPs like Kazuya's.

Link, not a cancel.

Gonzales just wants to grab you. The good thing is that the range on all his command throws is massive at 100px, and outranges everyone else's throws except for like, Marco's weird command grab. It's important to note that all command grabs switch sides. You have some choice normals to cancel into command grab. Any cancelable button - most notably 2LK and 2MP - will combo into command grab at their max range. This doesn't work for 5MK/2MK because they only link into command grab, and pushback will leave them slightly too far.
The roll is perfect for punishing fireballs if used preemptively. It's invincible for a long time, with a few throw-punishable frames. Use it from around 5HK range or further to avoid being punished, but it can work from closer if you do it early. Roll moves you forward 57px.
Gonzales also has some incredible air buttons. He has an easy time air-to-airing people to make up for his limited anti-airs - n.5MP needs you to be close, 5HK can trade or lose to some air buttons. Use either j.LP or j.MP for this, they've got similar hitboxes. There's also j.HK for your big combo-starting crossup, or buttstomp for a tricky crossup that knocks down.
On timing oki after 62369K: you can roll, 2MP, and either wait, jump forward to cross up or walk back > jump forward to hit in front. After 2HK you have to delay your jump a little bit for j.HK to hit.
Gonzales 2LK makes a good meaty that's safe against most reversals at the right distance, 80~90px away. It recovers fast enough to just block Lihua's DP and crouch Kazuya and Wulong's.