Default matches have a four star handicap, 180 second timer, and are a best of 3 in rounds.

Once one round ends, everything carries over to the next round. This would be:

When a player is on the ground, they're vulnerable to getting hit until their get up animation starts.

Another form of knockdown in this game is Sliding Knockdown. The character rolls and tumbles for a period of time which allows for combo extension.

The start of get up invincibility is indicated by a yellow flash and your character hopping off of the ground.

Wakeup invincibility is extended beyond the character's get up animation to where they're shortly invincible during their standing animation.

Upon getting launched into the air, if you aren't immediately hit afterwards your character will automatically Air Tech.

After Air Teching, you will be invincible until you land to the ground.

Interrupting the startup frames of an opponent’s attack or horizontal Step Dash causes your attack to deal an extra 300 damage. This only applies to the first hit if Its a multi-hit.

Certain moves benefit more from a Counter Hit, such as Ryuko’s 2/8A dealing an extra 600 damage when Its a Counter Hit. Other effects include extended hitstun, Crumple, etc.

Upon blocking certain moves (commonly charged Long Ranged Attacks), your character will be vulnerable for a short time before being able to act again.

When two moves of the same priority clash, both characters receive meter, are knocked back, and recover on the same frame.

Upon clashing in the air, your character will be knocked backwards. Can perform aerials afterwards.

Launching the opponent while their back is to the wall will cause a wallsplat. The opponent is stuck to the wall and slowly slides down to the ground. This allows for combo extension and big damage potential.

Each wallsplat in a single combo will decrease the amount of time the opponent is stuck to the wall.

Attacks that are done to a wallsplatted opponent receive 30% damage scaling.

The Combo Proration system was added to prevent infinites that were present early on in the game's lifespan.

There is a limit to how much you can use one specific move in a combo. It'll still do the same amount of damage, but once it reaches this limit the opponent will tech out and the combo will end.

Combo'ing off of a wallsplatted opponent will increase this limiter and not allow that many loops as before.

As the limit value increases, the following effects will occur:

There's two types of armor a move can have.

As the name implies, armor that protects you from taking damage or hitstun from incoming attacks.

This armor can be pierced by Break Attacks though, and depending on the move Its not always frame 1. Beating out this armor with a Break Attack will give you a Guard Break.

With this armor you still take damage, but are unaffected by Break Attacks and hitstun on frame 1.

Each move with this armor has a specific threshold of damage it takes before wearing off.

If you’re at low enough health (HP bar starts flashing), and you bring the match into round 3, you will be rewarded health recovery at the beginning of round 3.

The SP Gauge is used to perform actions such as Specials, Burst, and FIBER LOST SECRET ARTS. It's broken up into four 25% integers.

The SP Gauge increases whenever you:

Upon using meter to perform an action, the SP Gauge turns blue and freezes for awhile. During this time, your meter will not be able to increase.

The exception to this would be landing a Valor Burst that leads into Bloody Valor, and the potential SP gained from winning Bloody Valor.

The duration of Meter Cooldown depends on the move. The cooldown duration after Specials is shorter than Counter Burst for example. 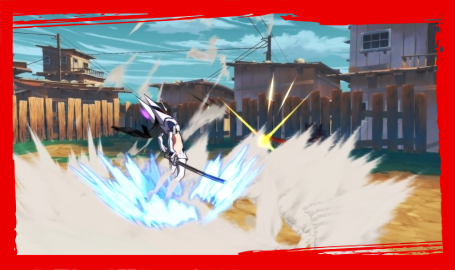 By spending two bars of your SP Gauge, you can perform a Burst.

There are two types of Bursts:

A Burst that has been performed while your character is in a free state and not under the effects of hitstun or blockstun.

Once activated, you become invincible and release a multi-hit shockwave that deals 1500 damage (non-lethal, cannot KO).

If the opponent is hit by Valor Burst, Bloody Valor will commence.

A Burst that has been performed under the effects of hitstun or blockstun.

Once activated, you become invincible and can break free of the opponent's combo or guard pressure.

The shockwave knocks back the opponent and deals 10 damage (non-lethal, cannot KO).

Counter Burst can also be performed in the air. However, you will not be able to perform any action until you land on the ground. 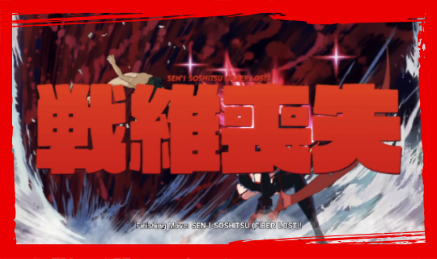 FIBER LOST SECRET ARTS (Fiber Lost for short) is an instant kill attack that can be performed once you have Valor Level 3 and your SP Gauge is at max.

Landing this on your opponent will immediately end the match and declare you the winner.

They can be combo'd into as well.