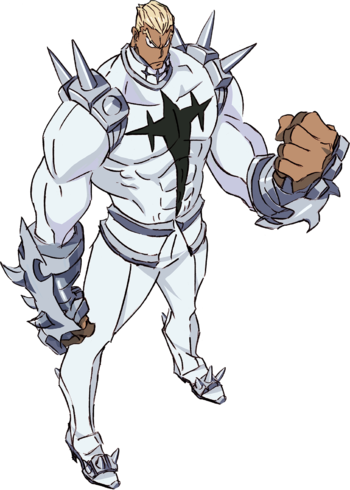 Ira Gamagoori (蟇郡 苛)
One of the student council's Elite Four. He is Satsuki Kiryūin's loyal, massive enforcer who leads the disciplinary committee at Honnōji Academy, and, being a member of the Elite Four, has a Three-Star Goku Uniform, and refers to himself under the title of Satsuki's "Impenetrable Shield".

Patience and solid defensive play is a must, but Gamagoori is capable of rushing down his opponents too thanks to his far reaching normals and hard to avoid guard breaks. He may be slow on the ground, but he has the highest amount of health in the game. This allows him to take lots of abuse from both himself and the opponent. You cannot sit in Shackle Regalia all day however, as it counts as blocking and a guard break will knock you out of it.