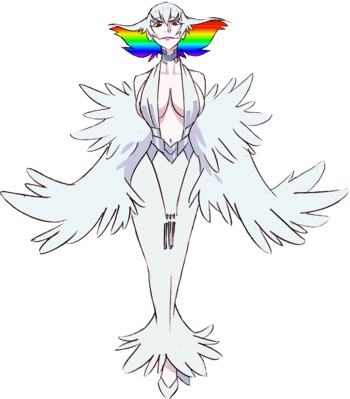 Revocs Corporation's CEO, a chair of Honnōji Academy's board of directors and the true antagonist of Kill la Kill.

Ragyo can perform Dash attacks from a vertical or horizontal Step Dash.

Ragyo is a zoner that specializes in capitalizing off the opponent's mistakes, using setplay in tandem with mix-ups to open up her opponents, and bombarding them from afar with her bullet hell styled zoning. With her arsenal of zoning tools, she can slowly chip away at the opponent's health and set up j.C to have very dominant stage control. Her damage output is phenomenal as well, being able to do massive damage off of a wallsplat and her sp.C. Ragyo's toolset however is a bit limited and can be restricting at first glance, but she does have room for some creativity in her playstyle, albeit a minimal amount. Ragyo can be played using a pure keepaway gameplan with her zoning, she can also be played aggressively with her gameplan using her large normals and set-play/mixups, or a mix of both; using her kit to be aggro while converting into zoning at the right times. Now, j.C, arguably is her most important tool, as it adds a whole new element to her zoning, mix-ups, and okizeme. This can come in the form of j.C okizeme which can be used off of a wallsplat or other methods to essentially turn the stage into the opponent's personal bullet hell. Using this can make her zoning/mix-ups unavoidable and can keep the opponent in a vortex of guessing to survive. With all of this together, you get a hard-hitting zoner with amazing tools to dominate neutral and her opponents.

However, Ragyo is far from perfect. She isn't particularly seen as strong for a reason, as it all boils down to many different factors. First of all her slow movement means your positioning must be taken with extreme caution since you have very little room for mistakes with her movement. This is because due to her low meter gain, one wrong misstep can cost you over half your HP being combo food for the opponent, thankfully she has high enough HP to somewhat let her tank high damage combos from some characters. However, her neutral as well is nothing to praise by any means, having very limited and slow tools in neutral on top of an already limited kit is very easy for opponents to take advantage of. Ragyo's zoning as well is very telegraphed and predictable so most of her kit can just be blocked and dodged with no real downside for the opponent and a lot of her mix-ups are very easy to react to, causing Ragyo's gameplan to crumble within seconds if j.C is not out to support her. Her reliance on j.C to be a threat is detrimental to her gameplan and can cause her to lose neutral very quickly if the game doesn't go her way. Ragyo's gameplan is also heavily impacted by the stage due to her needing a lot of space to achieve her advantage state, small stages such as Town can be borderline suicide for her while stages like Stadium or Fiber Palace can be godsend to her gameplan. Her MU Chart isn't great either, with many bad MUs plaguing her due to her inability to deal with a lot of the cast's tools such as SB Satsuki's 5B snipes, DW Ryuko's d.B, Most of Houka's entire kit, and more. Overall, these weaknesses heavily outweigh her strengths and solidify her place as a low tier, but with optimal play and skill, these weaknesses can be played around to a degree.

With all of this in mind, Ragyo's main gameplan will be to focus on attaining wallsplats or gaining distance to get j.C out as soon as possible on top of trying not to get hit so she doesn't become combo food for the opponent due to her low meter gain. With j.C out in neutral, she can be very aggressive and go for mix-ups, or go all out with her zoning to bombard the opponent and mix them up from a distance. However when j.C is not out, she will have to be very cautious as her slow movement speed and limited kit will prove fruitless if she gets careless, as this can cost her the round. To mitigate this somewhat, Ragyo can attempt to go for Valor 1, this will give her more defense options such as being able to combo after a CH Burst or winning Bloody Valor as the defender can be useful, albeit situational. So in conclusion, as long as Ragyo is careful, plays her cards right, and outplays the opponent with optimal play, she has a chance, even if it is a small one. 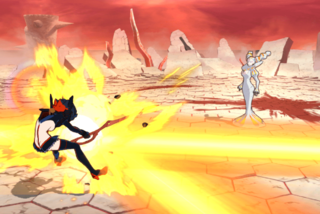 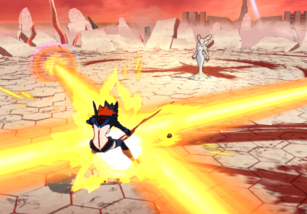 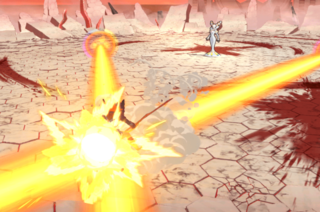