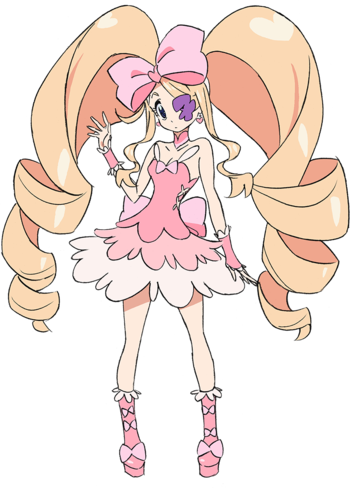 Nui Harime (針目縫)
She is the Grand Couturier of the Revocs Corporation, as well as the murderer of Isshin Matoi, from whom she took one half of the Scissor Blade. For this reason, she is the one Ryūko Matoi seeks to kill in order to complete her quest of vengeance. She is known for cute appearance, sadistic yet childish nature, and incredible fighting power.

Nui is a 'set play' character which means she largely will be relying on setting up traps against her opponents for them to fall into or setting up clones to limit your opponents options and allow her to follow up. She gets much of this done with usage of her clones available through her projectile and guard break attacks which summon these clones and each have a variety of uses from pressuring a block to forcing your opponents away. Knowing when and how to use her clones to your advantage is a huge part of mastering the character. An equally large part of Nui's character is her meter and her meter gain. Unique to Nui she has EX attacks (2 Melee EX attacks and 2 Guard Break EX attacks) that serve as fusions between her attacks with her clones. Each EX attack will cost 1 bar of meter to use and are crucial for either extending combos as Nui or for opening up your opponent to start a punish with. Nui is defined by her large meter gain and her usage of her meter however do not mistake that this means you should be spamming her supers and EX attacks at will since she is counter balanced with having a lot of meter cooldown on her supers and EX attacks until valor 1 so whiffing an attack using meter will leave Nui wide open to ne hit without hope of bursting or will make it so you will get no meter from combos started with these kind of attacks. Its these factors and more that push Nui to a more defensive playstyle more focused on baiting out options from your opponents and counter attacking when possible, however do note in select match ups Nui is allowed and permitted a more aggressive playstyle though even in those matchups Nui's gameplan of zoning and baiting is just switched to being more proactive rather than reactive.

Nui's most basic and and important bread and butter combo revolves around her 2/8 A finisher, from the finisher you can perform a j.B and if times right the clone will hit your opponent right back at you allowing you to perform the finisher again.

From her 5A or the return hit of her j.B Nui can also then use 5B to 5BA A which when it connects can send into her Scissor Drop, from Scissor drop you may either use her B finisher for the most damage/meter or if available you can combo the drop to sp. B or sp.C.

When times correctly Nui can perform her j.B from a homing dash to have the clone send twards Nui and allow her to start her 5A combos

During many points of her combos there are times when your opponent can burst out, Nui can counter and answer these bursts if she times her j.AB during these parts of the combo (such as after 5AA, 2/8 A finisher, j.A or her homing dash).

in general her j.AB is a great tool for extending her combos since she is so often hitting in the air.

When starting combos from a wall splat be sure to intentionally whiff your %A but hit the 5AA, doing this will keep the combo limit lower and allow you more follow ups afterwards

Note: once late enough into the combo limit Nui will not be able to perform her EX attacks even in situations where she normally could