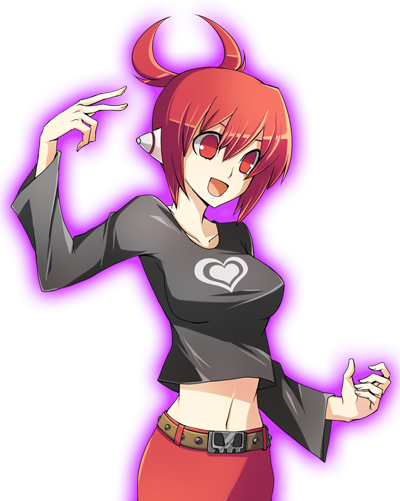 Kae is a character with a hot-headed, energetic personality and fire-based attacks. Kae is the only character that has a direct benefit of having high Heat, and can also manipulate her opponent's Heat level easily. Being an absolutely volatile character, all of her matches should last 30 seconds or less win or lose. If you have more than a single health bar left at the end, you dominated that match. It's just how Kae is!

You will not win with Kae by blindly rushing at your opponent; you will only end up back at the character select screen in 10 seconds or less.

Try to always keep a shield handy when going melee, you're going to need it!

Kae's darts and shadows are a great setup tactic to start meleeing people with her claws, but don't do them too often as they have a bit of startup and can leave you vulnerable to quicker attacks, as well as have low durability. Mix in some of her normal projectiles as well, and play a little on the defensive side so as to build meter. Then, while the enemy is on the offensive, get in a little closer and then Force Edge them. Kae's A Hyper is both very fast and covers a wide area that allows her to begin meleeing people, just don't try to use it on a target already moving or you'll likely end up punished for it.

Kae's Solid Shot can be dash canceled very quickly and the move becomes significantly more useful when you control to shots to spread it out and dash cancel it, adding a quick spray of ballistic shots.

When engulfed in flames, she has the ability to manipulate her opponent's Heat with the dash A fireballs. They're also not grazeable, so hitting with one set can allow you to follow up with another if you guess right on the next direction your opponent will move to, which leads to heat gain, which leads to you Lunging straight into their face for a good life bar.