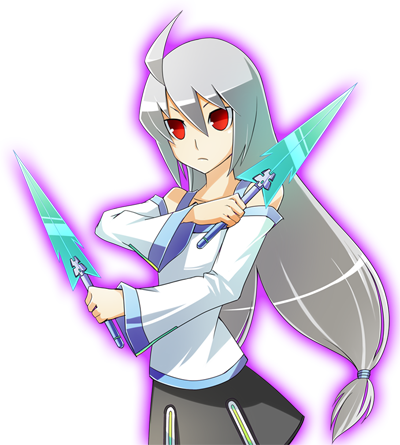 A melee-oriented version of Suguri with completely different weapons. Only available in X-Edition. For information on how to unlock her, see the FAQ.

Pressuring is SP's main game. Being the most agile character in the game means that you can weave in and out of range while laying down swordwaves really quickly. In addition to this, her Counter is especially potent in close quarters, as .3 of a second to fly in and start beating someone down is a lot more powerful than it seems. While I don't use the Shocks too much, they linger a bit which can make problems for some other characters and are fairly good. Her Hyper A has a little more shield than the duration of the attack, so usually this is your best time to rush in and try to melee people.

The Counter move is particularly useful for avoiding some 'difficult-to-avoid' attacks without spending meter for a shield, such as Saki and Nanako's hyper attacks.