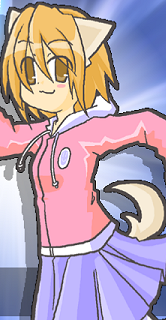 QP is a Pomeranian and is the Goddess of Pudding. She is from a different Orange Juice franchise, QP Shooting.

Only available in X-Edition. If you want to unlock her, please see the FAQ.

QP is OP. Possessing good movement, amazing projectiles, too much damage because of a super, and stuff.

Since QP is OP, she's banned from competitive play.

Hyper A2: Red and Blue Special

Her Weapon B can be dash canceled early in the move to keep the pressure on. Look for any opportunity and excuse to use the circle of spike bunnies and go to town on the opponent.

You should feel bad for bullying your friends. Make sure you only use her sparingly to explain or remind why she's too good otherwise you can actually turn people off from Acceleration of Suguri X Edition and that's a bad thing. QP Mirrors are pretty fun, though.