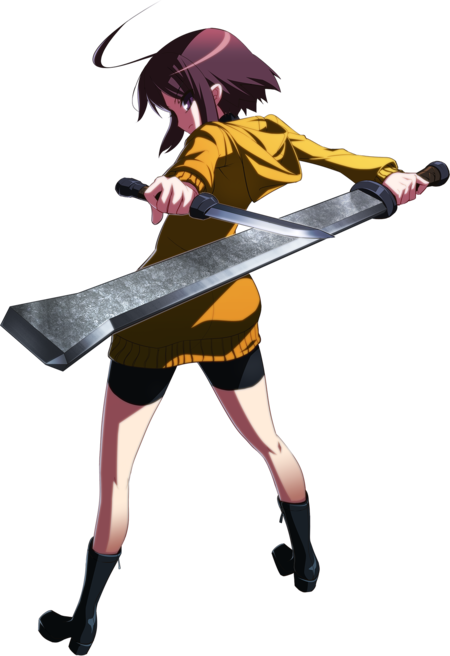 Linne has long been searching for a legendary sword "Indulgence of Assunder/Rending" to end her eternal life. Quick-minded and stoic, Linne is someone who works well at her job and is focused on her goals, not letting her emotions get in her way.

Hundreds of years ago, Linne and her brother Kuon were used in Yato's a human experiment to create new abilities. As a result Linne gained a power to transfer her consciousness from a body to another - making it possible for her to live eternally. In addition, if her host body gets killed then Linne's consciousness is automatically transferred to a new body. This how she has lived her life for several tens of bodies.

Linne didn't want to continue possessing and ruining the lives of unknown girls, so she searched for a way to end her eternal life. The answer Linne found was that a legendary sword called the Indulgence of Assunder could rend her existence apart and end the curse she is bound to.

She has a double jump and is pixie fast. Linne uses her two swords (unnamed and unsigned) for multihit moves and a tricky style of play. While a little slow, her double jump gives you an edge for air to air and get above the opponent. Similar to Seth in speed, but with a little more reach and projectiles to deal with longer ranges.

On a fundamental level, Linne neutral revolves around using kuuga, air kuuga, and ground pokes at their best ranges for the matchup, and simply dashblocking in or backdashing away if you feel like none of these are currently favorable. Which tools are best and when to use them is matchup specific, but here is an overview of Linne's most important tools in neutral.

Block, shield safe moves to win in GRD or to push them back. Throw tech with 1(B+C)~(A+D)~B or 3B~A+D to OS assault, and 1(A+D) to OS staggers. Don't always throw tech; getting thrown is better than getting combo'd.

Buffer backdash with 4[4] if you're midscreen and think you can get away with it. Sparingly mash gaps with your fastest normal that hits.

Chain shift the first possible gap safely with 2DDDDD so you don't green shield while trying to input it.

j.B>j.6B are interchangeable unless stated otherwise.