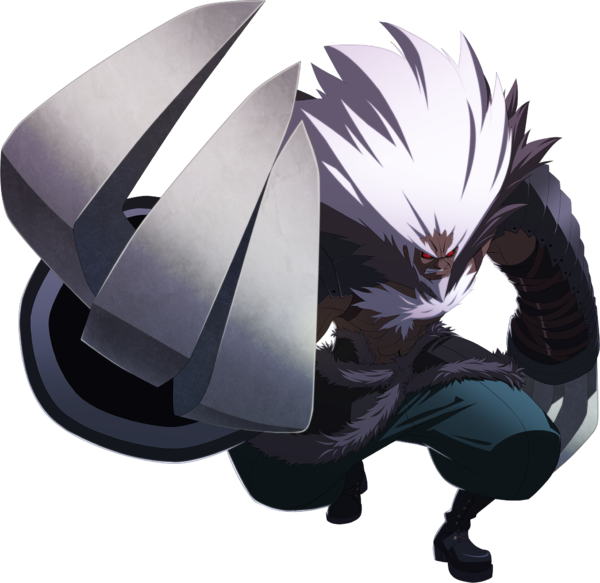 MY BODY IS BIG. YOUR BODY IS SMALL.

He seethes. To save the will and life of his master with his stout arms. Accepted the eternal curse to be with his master, obtained the superhuman power. The old soldier lived through destruction and battles, desires for the master under the silent nights. Until the day he gives up his life at the battlefield.

Waldstein once fought for Licht Kreis until he was impressed by Kuon's chivalry and betrayed Licht Kreis for the rival group led by Kuon, Yato. Then Kuon disappeared, so in the meantime he's looking after Kuon's sister Linne while they go around searching for a god-slaying sword. Currently freeloading with Linne at Hyde's house.

Health: 10,800
Dash Type: Step
Ability: Destroyers - Waldstein's claws can completely eliminate all manner of projectiles when using a slash-type attack such as 5C, 2C, or 236A/B/EX. A special sound effect is played when this is performed successfully.

Though cursed with possibly the worst ground movement to ever grace a 2D fighter, Waldstein still gets surprising mobility through the universal Assault mechanic, and is able to more than make up for his lack of speed with the absurd range of his normals. Waldstein is more than capable of switching between halfscreen pressure, grappler, and zoning through his normals as the situation dictates, though he still has issues with more dedicated long-range characters such as Merkava and Vatista.

Note: In open-ended cases, damage will assume the first option as a starter.